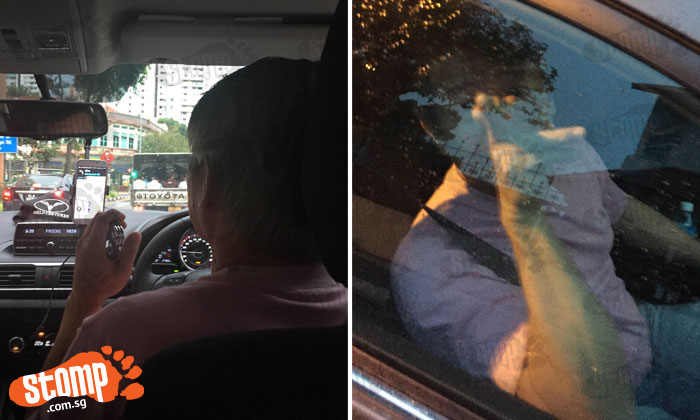 A Stomper lodged a police report after having the worst ride of his life on Wednesday evening (Sep 21).

He had sent Stomp photos showing the police report that he made later that night.

It all started off on the wrong foot when his Uber driver arrived at the wrong location.

Despite calling and describing how to get to the right location, the driver was upset and kept interrogating the Stomper.

When he finally arrived, the driver did not greet the Stomper and his girlfriend.

When the Stomper suggested a shortcut to avoid a congestion, the driver is said to have responded with a curt, "Why don't you come and drive?"

The worst part of the journey was when the driver constantly used wrist trainers while driving.

At one point, he was apparently even using both hands and only his forearm to steer the vehicle.

"My girlfriend saw him doing this constantly and urged me to tighten my seat belt."

Upon arrival at his destination, he decided to make a formal complaint to Uber about the driver's attitude and unsafe methods.

When the Stomper took pictures of the car and licence plate, the driver opened the door, pointed at the Stomper and said:

"You take picture right? You take for what? Looking for trouble?

"I know where you and your family stay, you watch out, you all watch out."

The Stomper added that the driver's monologue was filled with profanities.

"I believe that if you have a problem with an individual, you take it up with that person, rather than threaten your family, and if this driver is still allowed to drive Uber, Grab or even a taxi, it could be an extremely dangerous situation for anyone whom takes his vehicle."

In his police report, the Stomper stated that he has informed Uber about the incident but has yet to get a response.

Related Stories
This is what happens when you deliberately speed up to prevent fellow motorist from overtaking
Watch how MPV driver travels on road shoulder to 'cut queue'
Cabby takes shortcut from Jln Sayang to Jln Kembangan -- by going against traffic
More About:
uber
reckless
reckless driver