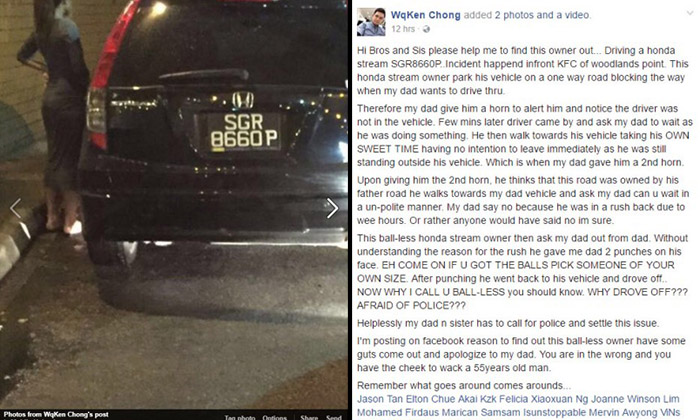 The police are investigating an incident where a driver punched an elderly man who allegedly sounded the horn at him for blocking a one way road at 4A Woodlands Centre Road on 11 September 2016 at about 11.23pm.

The Police were alerted to the case of Voluntarily Causing Hurt at that location.

When the police arrived, the alleged assailant had already left the scene.

The Police are investigating this road rage incident.

The investigation comes in response to a Facebook user's angry post on his account to call out a driver who punched his father after a dispute outside the KFC outlet at Woodlands Point.

WqKen Chong posted some photos and a video that shows the scuffle between the man and his 55-year-old father, which Stompers Maui and Marcus alerted us to.

In his post, Chong states that his dad first sounded the horn as Honda Stream SGR8660P was blocking a one-way road.

The driver of the Honda Stream was not in the vehicle at that time, and only came back to the car a few minutes after hearing the honk.

The man then allegedly told Chong's dad to wait as he was doing something, but "took his own sweet time to stand outside his vehicle with no intention of leaving".

Chong sounded the horn a second time, and the man told him, "Can you wait."

The elderly man responded by saying no as he was rushing back, and this prompted the Honda driver to ask him to step out of his vehicle.

When Chong's dad did so, the Honda driver allegedly punched him twice in the face.

Chong's sister, who was the passenger in the car, called the police for help.

Another woman, who was with the Honda driver, could be seen standing by the side of the road when the scuffle occurred.

Related Stories
Men throw punches and grapple each other near Gardens by the Bay
Youths shout at and punch each other after huge fight breaks out at Bugis street
Driver rains punches on security guard after being told to leave Harbourfront Centre pick-up point
More About:
police
investigation
assault
road rage
road bully