'Pokemon invasion' at Changi airport: Here's where you can catch the cuddly monsters 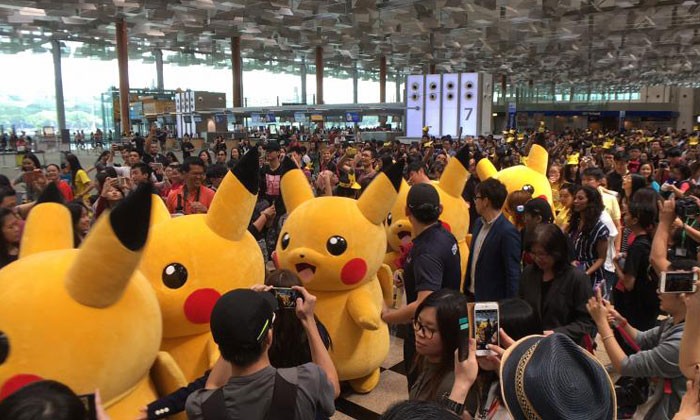 Before you plan the long journey to Changi Airport Terminal 3 to catch Pikachu in action, strap on hardy boots and get ready a long selfie stick.

Chances are, you'll get run over by hundreds of children and diehard fans.

Whenever the festive season rolls around, Changi Airport rises to the occasion with art installations and light decorations.

This year, the airport launched its Pokemon at Changi year-end festivities, kicking off the holiday season with a Pikachu Parade on Friday (Nov 18).

Pikachu, a popular character from Nintendo's Pokemon series, made a phenomenal comeback with Niantic's mobile game Pokemon Go this year.

The first parade took place at 10.30am this morning (Nov 18), while the second and last session will happen at 7.30pm this evening.

Be prepared to gawk as 10 life-sized Pikachus dance their way into the airport's newest Christmas installation amidst falling "snow" and music.

A tip? Go early to avoid the crowd. There were at least 500 people jostling to get a good view when we were there this morning.

That's not all. Sitting right outside the Departure Hall at Terminal 3 is a seven metre-tall Pikachu, the largest character installation at the airport by far.

Next to it is a towering Gingerbread House and a Christmas tree decked with pokeballs and you guessed it - more Pikachus.

Although the parade ends on Friday, Pikachu will continue to make an appearance on weekends up to Jan 1, 2017 at the Gingerbread House.

Fans of Snorlax can scoot over to Terminal 2 where three life-sized characters are lounging in an eternal state of bliss. Take all the photos you want, they're not going anywhere for now.

There are also interactive video kiosks at T1, T2 and T3 Departure Halls where visitors can get their faces painted onscreen and execute some nifty Pokemon moves.

Aside from the original Pokemon characters, some from Nintendo's new Sun and Moon series also make an appearance as installations. All these Pokemon characters can be found at various locations across the airport.

Visitors can embark on a Poke Trail to hunt for 26 of them and stand a chance to win exclusive Pokemon merchandise.

Related Stories
Huge crowd seen at MBS till 2 in the morning -- and you can probably guess why
A "lax" in judgement: Sweet husband tries to surprise wife with Snorlax plushies but doesn't realise they are giant-sized
pokemon
Pokemon GO
Changi airport
creative