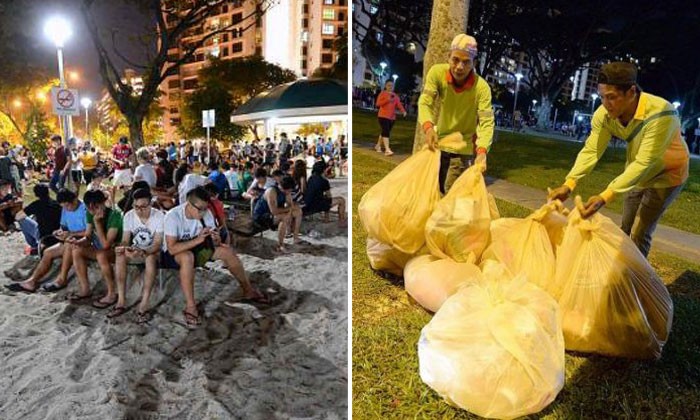 It has started at least one fight between two adults, reportedly caused one driver to crash, and created a traffic hazard because players suddenly dash across roads.

Pokemon Go, a location-based augmented reality game where players catch, battle and train virtual creatures on their mobile devices, has now been blamed for another problem: Rubbish.

Loads of it. At Yishun Park, the rubbish was left behind by some 400 players who gather nightly at the popular site, known for its many PokeStops, where the creatures spawn.

By cleaner Affendi Sohor's reckoning, the rubbish fills 70 big bags every night. Since the weekend, that is how much he and two fellow cleaners have collected each night from 10pm to 5am.

"We were told to install four new bins next to the existing ones because of this Pokemon thing," he told The New Paper on Tuesday night.

"But there is still a lot of litter."

That is a substantial amount of rubbish for a park barely half the size of a football field.

And because of the numbers who turn up, the cleaners work non-stop from the time their shifts start to just before dawn.

Empty bottles, cans, food wrappers and used tissues are the typical litter left behind by players hooked on the game, which was launched about two weeks ago.

Many use the fitness equipment at the park as seats, while others mill about or lie sprawled on picnic mats.

"The crowd remains the same size all the way till 4am," said Mr Affendi, who has been a cleaner for three years.

"So we have to keep picking."

A spokesman for the National Environment Agency (NEA) said they are aware of the large amount of litter at the park.

"Members of the public are reminded to clean up after themselves before leaving the park, as an act of courtesy to other park users," she said.

"To tackle the littering problem effectively, we need the support and co-operation of the public. The key message behind our education efforts is for everyone to treat our public spaces like our own homes."

There is also a traffic problem.

On a typical night, many cars can be seen parked illegally along Yishun Central and Yishun Avenue 11, which are two-lane roads next to the park.

These cars are metres from the traffic light junction and buses have to swerve round them to avoid collisions.

TNP approached one driver who was parked illegally along Yishun Central at about 10pm. The man, who looked to be in his 30s, admitted he was there to catch Pokemon, but claimed he had only stopped his car there for 15 minutes.

"There are four PokeStops in this area and I heard there are rare Pokemon here," he said.

"I know I'm obstructing, but if people want me to move, I'll move. It's just for a while."

Elsewhere, at the Japanese Garden in Jurong East, Lianhe Wanbao published pictures of several young people believed to be playing Pokemon Go climbing over the gates after the garden was closed.

A guard was also seen rounding up the trespassers and chasing them away.

Residents in Hougang, another popular spot for players, have called the police after being unable to find parking lots.

Fortunately, no fights have been reported, unlike at Plaza Singapura last Sunday, where two men, aged 28 and 33, were arrested for affray at the mall's carpark.

Online, radio DJ Rosalyn Lee was involved in a spat with netizens after she called the game a "devolution of mankind" in an Instagram post.

But the game has also brought out some good in Singaporeans, as demonstrated by a group of players in Hougang.

On an amusing note, real estate agents are trying to cash in on the hype, with one condo rental listing on 99.co mentioning a PokeGym and nearby PokeStops as the first point in its description.

Mr Norman Koh, 38, the agent who put up the listing, said he took inspiration from other agents in the US, who he said have been doing it ever since the game was released there.

"At the end of the day, we all know that the tenant will rent the unit for other factors, not Pokemon. But it's interesting to include such information," he said, adding that he expects other agents to soon follow suit.

Dr Michael Netzley, a social media expert from Singapore Management University, said the Pokemon Go trend will last longer than most games due to its use of new technology.

He said: "The game is tied to a real-world experience and something like that tends to last longer than the usual online trend.

"If the game creators have good updates, then the game will be quite sustainable."

He said there will be more of such technologies and games using augmented reality.

"There just needs to be some social adjustment. This will not be going away and there will be more of it, not less," he said.

As for the littering and fighting as a result of the game, Dr Netzley said that these are caused by human nature, not the game.

"Such things are basic human behaviour and this won't change.

"People have been fighting over other things and littering long before this, it is just a new reason.

"The stimulus is different, but the behaviours are the same."

Less than two weeks after the release of Pokemon Go in Singapore, a 39-year-old app developer says he has "caught 'em all".

But his claim has got other players of the mobile game here up in arms, saying he "cheated".

Mr Terence Ho took 10 days to catch all 145 available Pokemon, including the rarest and most powerful ones.

He started playing when the game was launched here on Aug 6 and got his last Pokemon on Tuesday at 12.05am.

He said he spent about $150 on in-app purchases by buying "coins" for lures and incense in order to progress at a faster rate.

Mr Ho told The New Paper on Tuesday: "It's always been the goal of every Pokemon trainer to catch all the Pokemon... I'm no different."

Mr Ho also "caught" region-exclusive Pokemon that are only available in other parts of the world, such as the US, Asia, Europe and Australia.

Mr Ho got friends living in these areas to log in to the game using his account and catch them for him.

This method, known as sharing an account, is frowned upon by the game's developer Niantic Labs, which considers it cheating, as it makes the game an unfair one. Those caught doing it may be suspended or have their account terminated.

But Mr Ho insisted: "Every one of us uses our own unique and creative ways to solve each problem. All players have this problem of catching region-exclusive Pokemon."

Not everyone agrees with him.

Student Timothy Lee, 19, said he "didn't like Mr Ho's methods, because the game was not played the way it was intended to be".

Others wondered if he had used third-party applications that allow buyers to spoof their location, or whether he had also asked friends to catch non-region-exclusive Pokemon for him.

To this, Mr Ho replied: "I caught all the local Pokemon with my own blood, sweat and tears. No friends helped me locally because they were busy with the game too."

Mr Ho said he spent hours after work at the park near his home in Ang Mo Kio, catching Pokemon till nearly 2am.

He also walked 10km to 20km each day, but later switched to cycling to cover more distance.

"I went to over 10 locations in Singapore. The farthest would probably be Punggol."

Other players have been more supportive of Mr Ho's efforts.

One of them, who wanted only to be known as H.J., said: "I don't believe that what Mr Ho did affected the integrity of the game, he is clearly passionate and dedicated."

Student Joshua Goh, 19, said Mr Ho has "supported the game through his many in-app purchases, so this is not as big a deal as others perceive it to be".

Mr Ho said he is now looking forward to catching the rest of the Pokemon which have not been released (there are 720 in total).

To do this, he is planning for "more sophisticated teamwork".

And after that? Mr Ho said with a laugh: "It's time for me to get back to proper work."

Related Stories
Sea of Pokemon hunters storm across road Hougang Ave 10 to Punggol Park, blocking oncoming cars and buses
More Pokemon Go madness at Hougang and Toa Payoh: Trainers dash across road and make a lot of noise at 1am
Seriously guys, the game is not worth your life! 'Crazy' crowd near Block 401 in Hougang rushes across road to catch Pokemon
Driver crashes Honda into railing in Queenstown while trying to overtake car allegedly used for Pokemon Go
Young girls using personal mobility device to play Pokemon Go in Woodlands is an 'accident waiting to happen'
More About:
Pokemon GO
inconsiderate