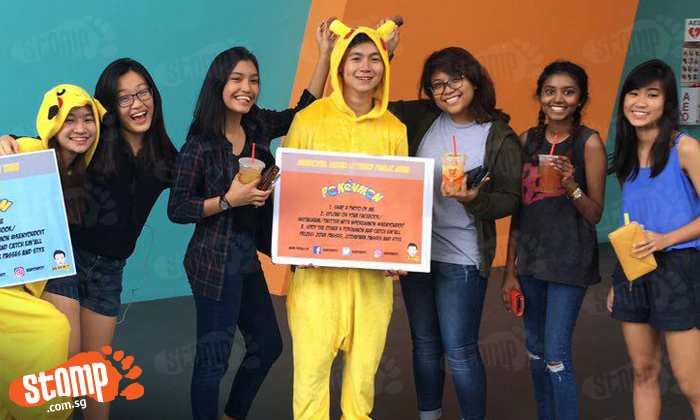 A group of Ngee Ann Polytechnic students have jumped on the Pokemon Go bandwagon and used its hype for a positive cause.

Stomper Pikachiobu123 shares the interesting sight she came across in school on July 28.

"I’m still waiting for Pokemon Go to come out and of course, I’m sensitive to everything Pokemon recently as a result.

"However yesterday in school, I noticed some people dressed in Pokemon costumes. I saw Charmanders and quite a few Pikachus, and they all screamed, "Take a photo of me!"

"On closer inspection, I found out that the costumes were a part of a group of Year 3 advertising and public relation students’ final year project, 'Ken You Do It?'

"They said it was to promote the government’s 'One Service App' which featured, just like Pokemon Go, the use of your camera and location.

"The app is to report municipal issues, such as fallen tree branches and collapsed roads, and all you have to do to report is Snap, Tag and Send! The tagging part apparently features the use of geotagging for the location.

"All I had to do for the 'Pokemon' game was take a photo of the Pokemon and post it online with their hashtags, #pokenmon and #kenyoudoit to 'catch' them. The top 3 scorers would win Zouk passes, Zoompark tickets and Styx shirts.

"I had fun going around school and trying to catch the different Pokemons. The Pokemons were all also situated near various municipal issues, so as to raise awareness of these problems that we may usually overlook.

"The Pokenmon game was an interesting twist on the Pokemon Go craze happening, it was simple and easy to interact with. I had fun while trying to win Zouk Passes."