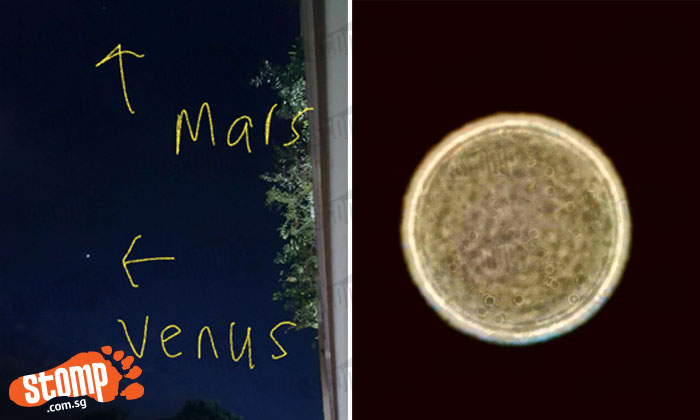 The brightest celestial object in the sky became so prominent at dusk yesterday (November 30, 2016), and it also appeared to seem as if it was nearer to Earth.

If you missed it, fret not because Stomper Kannan took amazing shots of the planet yesterday night to share with everyone!

"Though the photographed images of the Venus taken from Woodlands could be mistaken for the Moon, it is actually the Planet Venus.

"In some of the photos, the trees in the foreground appeared blurred and due to this, the Venus looks much bigger than it should be.

"Scientists refer this to some kind of optical illusion created by our eyes, similar to the 'Moon illusion’ theory. Nevertheless, the Venus still looks big when seen with the naked eyes in the night skies over western Singapore."

And if you're a fan of astronomy, Kannan says that this December is going to be a great month for such celestial sightings, especially for the planets Mars and Jupiter.

"Just like Venus, Jupiter is said to be the second brightest in our skies but will appear in the East just before Sunrise.

"Astronomy enthusiasts may wish to know that the planets are at their best only when the skies are totally free from cloud cover.

"On December 1, the waxing crescent moon is set to appear near Venus after sunrise for one to two days before the distance become further between them.

"While taking shots of the Venus yesterday, in the far distance, there were lightning in the skies which made the sky turn purple."