Man in his 60s dies after getting run over by bus outside Toa Payoh interchange: 36-year-old bus driver arrested 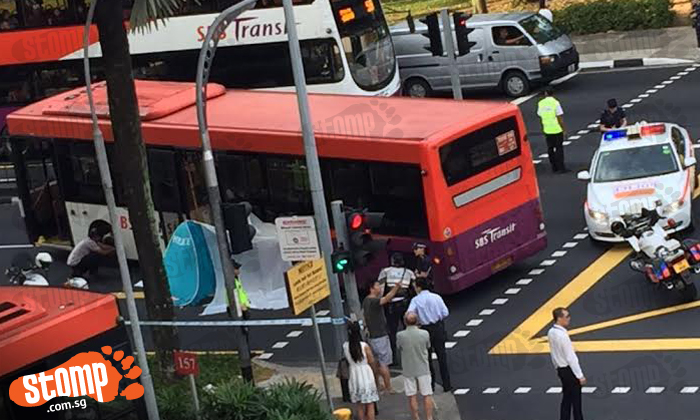 A pedestrian has died after an SBS Transit bus ran him over just outside Toa Payoh bus interchange on Thursday (July 7).

Stomper Stella saw the aftermath of the accident this morning.

In the photo she sent, police have set up a blue tent at at the area.

The victim, a man in his 60s, was pronounced dead at the scene by paramedics, said a Singapore Civil Defence Force (SCDF) spokesman.

In response to queries from Stomp, police said they received a call for assistance at 6.24am along Lorong 6 Toa Payoh towards Braddell Road upon.

The male pedestrian in his 60s was pronounced dead at scene.

The 36-year-old bus driver was arrested in relation to the case. Police investigations are ongoing.

57-year-old Lam Koon Heng, a commuter on board bus service number 238, told The Straits Times that at about 6.15am, the bus captain told them all to alight.

"We were told that the bus (service number 235) in front of us had knocked down a pedestrian," said Mr Lam.

"The bus involved in the accident was blocking the interchange exit."

Facebook user Dawn Chan said that traffic was heavy around the area due to the accident.

In response to media queries, SBS Transit's senior vice-president for corporate communications Tammy Tan said the company was assisting police with their investigations.

"We are very saddened and sorry that this has happened. Our immediate priority is to get in touch with the family of the deceased and to render assistance," she said.