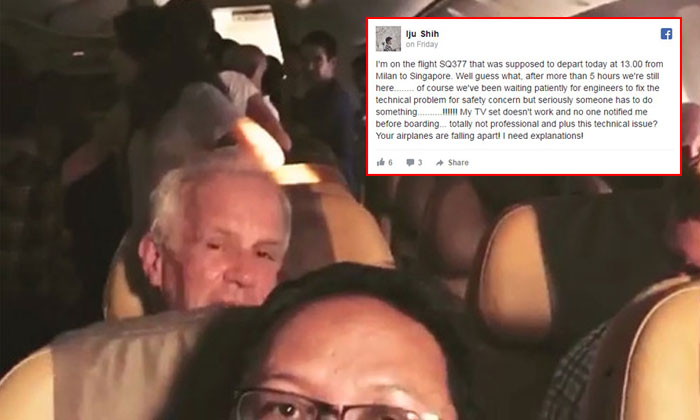 A Singapore Airlines (SIA) flight from Milan to Singapore was delayed more than 24 hours due to technical issues.

Flight SQ377, a Boeing 777-300ER, encountered a technical issue while the aircraft was still on ground, a spokesman from SIA told The Straits Times.

"As the engineers on ground required more time to fix the issue, a decision was made to delay the flight and passengers disembarked normally," the spokesman added.

"Hotel accommodation and meals were arranged in Milan for affected passengers."

Some passengers on the flight - scheduled to depart at 1pm on Friday (Oct 28) - posted their grouses on social media.

One, known by his Facebook handle LV LV, said: "We were stuck on SQ377 for almost seven hours in Milan."

He added that no ground staff were in sight when they disembarked from the plane.

Another passenger, known as lju Shih on Facebook, said: "Of course, we've been waiting patiently for engineers to fix the technical problem for safety concern, but seriously someone has to do something."

SIA has apologised and responded to both complaints on Facebook.

A video posted on Instagram by user Sixiu showed people milling around in a grounded aircraft. She commented in response to a question to her post: "There's a problem with the plane and we were trapped for six hours inside with no air-con!"

SQ377 was rescheduled to depart Milan at 2pm on Saturday (8pm Singapore time) and is expected to arrive in Singapore at 7.40am on Sunday.

SIA said it is about 24hours and 40mins behind schedule.