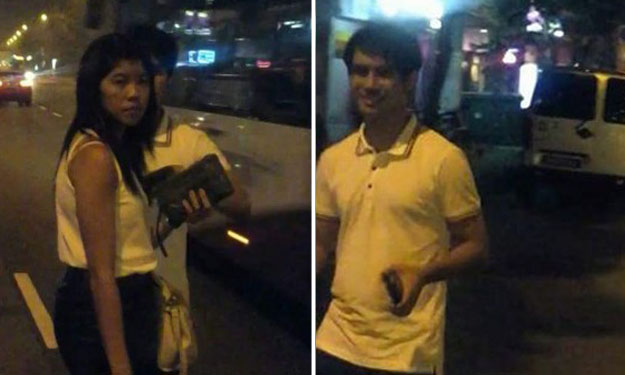 A passenger allegedly vomited in a cab and when he and his companion were told to alight, they not only refused to pay the fare but punched the cabby.

"To all FB users, kindly please help to provide some information on the particulars on these 2 persons. I, as a taxi driver fetch them from Suntec Tower 2 to 112 Katong but along the way this guy vomited on my taxi and yet when  drove to Caltex petrol station along Tanjong Katong and demand them to alight, they try to escape.

"Didn't pay for cab and yet punch me on my lower jaw.

"Have reported to the police on the spot. Ask them to wait for police, yet trying to run off by flagging for another taxi.

"To all taxi drivers, please be wary of these 2 persons."

He posted some photos of the two people in question, and uploaded a video of them trying to flag down another cab on the road.

Nick said that a woman had helped this couple book his taxi through the GrabTaxi app, but is also currently uncontactable.

"Having informed the lady asking for her co-orperation last night, she replied ok but to call her next day.

"In the end, unable to get her the next day. Called mobile but nobody picked up.

"Even GrabTaxi try to contact her and she avoid asking their calls. Now is up to the police liao."

Additional video on the 2 persons who try to escape after punching me.(Video shows a clearer pic of the guy towards the end of video.)