Passenger boards taxi in S'pore and tells cabby to go to 'Ten N': Make a guess where that is 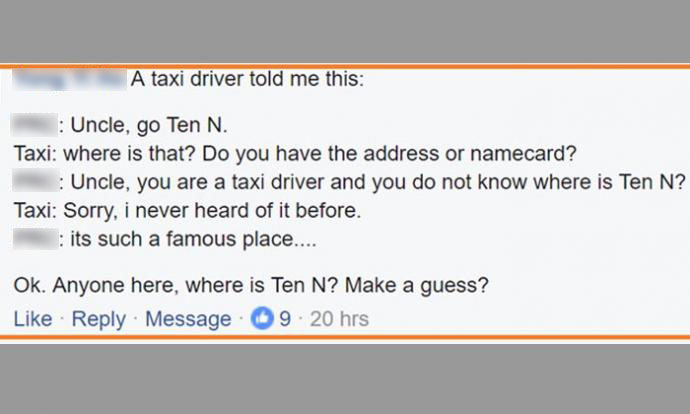 On a list of strange instructions to give cabbies, this probably ranks somewhere on top.

Beh Chia Lor has published a screenshot showing a conversation between a passenger and a cabby in Singapore.

According to the screenshot, the passenger informed the cabby that he or she wanted to go to 'Ten N'.

The cabby was bewildered with the request and said that he had not heard of the place.

The passenger insisted that Ten N was a famous place in Singapore.

As it turns out, Ten N is actually Ion Orchard, as a netizen smartly pointed out.

If you still don't get it, separate the letters 'Io' and 'n' in Ion and there you have it, Ten N!

Being a creative bunch Singaporeans came up with their own renditions as well as recollections of mispronounced places in Singapore.

"OMG! I still remember an ex colleague who pronounced the word IMM (imm) instead of saying it I.M.M. I literally choked!!"

"Taxi Uncle shared with me that he had a passenger ask him to go to yemkar hotel, turns out it was YMCA being pronounced as a word."

Check out the more hilarious things that netizens have said in the gallery above.