Parenting level, Asian: Conversation between S'pore mother and her son will leave you in stitches 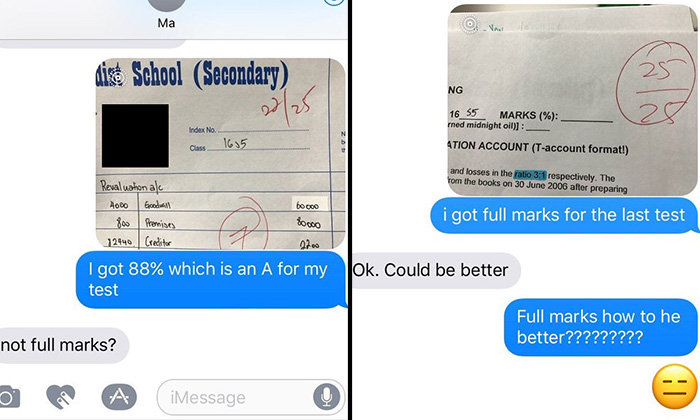 You know all those jokes about Asian parents being tough to please?

This epic conversation between a Singaporean mother and her son seems to personify all those memes and jokes.

Viral photos of text messages between the two have been featured on social media communities such as SGAG.

In the first conversation, the son explains to his mother that he scored 22 out of 25 marks for a test in school.

His mother, unimpressed, asks why he did not get full marks.

In the second conversation, he sends an image to show that he scored 25 out of 25 marks for a subsequent test.

His mother hilariously responds , "Ok, could be better."

The son, annoyed, asks how he is to do better when he has already gotten a perfect score on the test.

The exchange has drawn many a hilarious response from netizens, who have stated their own similar experiences with their parents.