Paralympics gold medallist Yip Pin Xiu: 'I'm not doing it for the money' 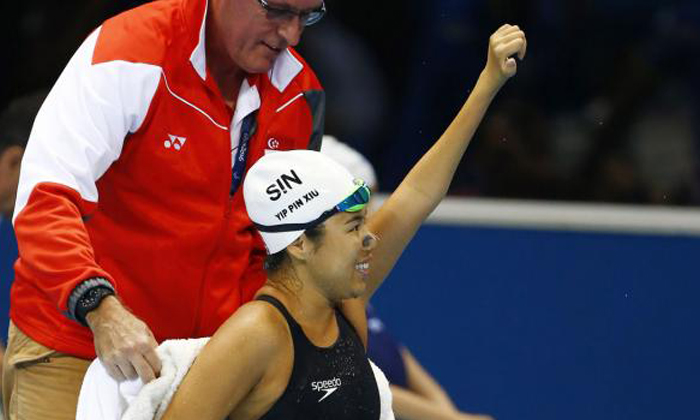 Both won gold in their swim events in Rio - in the Olympics and Paralympics, respectively.

Does this mean they should receive the same reward for their achievements?

An online debate has been raging since Yip won the first of her two gold medals in the current Paralympics, with the majority pushing for Yip to receive the same $1 million award as Schooling in the recent Olympics.

Some of them pointed out that other countries, such as Malaysia, gave the same reward to both their Olympic and Paralympic gold medallists. (See report below.)

The New Paper understands that this amount is likely to be increased this year, with the amount made known to the para-athletes when they return to Singapore.

Whether it will be anything close to $1 million remains to be seen.

When TNP asked for her take yesterday, Yip, the first Singaporean to win multiple gold medals at the same Paralympics, said she did not do it for the money.

But she added that it would good for athletes and para-athletes to be treated as equals.

"I've seen the debate going on in Singapore. It's nice that people are trying to fight for equality for us," she said.

"I am not doing this for the money. But, of course, equality is the goal. I don't expect to get to the goal immediately but progress would be good.

"I would really like to see progress being made in the para-sports scene."

Today Online also quoted Yip as saying: "Eight years ago, if you had told me it (having equal prize money for para-athletes and able-bodied athletes) was going to happen, I would say stop kidding.

"Because, eight years ago, we were far from (achieving) that. But over the years, we have seen more support, more recognition and people being inspired by para-athletes. And we're grateful for that."

The shooter, who represented Singapore in the Asean Para Games hosted here last December, said: "We train as hard, work as hard and fight as hard for our country. If anything, we work even harder to overcome our physical disability.

"When we get on that podium, the same national anthem is played. So why don't we deserve the same?"

But there is an obvious disparity between para-athletes and able-bodied athletes, particularly in the respective pool of competitors.

When Schooling, 21, received $1 million from the Singapore National Olympic Council's Multi-Million Dollar Awards Programme, it was for defeating the legendary Michael Phelps and other top-name swimmers, after two gruelling rounds to qualify for the final.

When Yip won the 100m backstroke S2 last week, setting a new world record, and the 50m backstroke S2 yesterday, she beat six rivals with direct entry into the finals of both events.

There were not enough competitors to fill all eight lanes in the pool.

To be sure, Yip, who became our first Paralympic champion when she won the 50m backstroke S3 race at the 2008 Beijing Games, deserves recognition and whatever reward the Singapore National Paralympic Councildeems fit for her under its Athlete's Achievement Award.

But it would not be fair to compare her achievements with Schooling's.

When asked about this, Mr Raja Singh, 54, the vice-president of the Singapore Disability Sports Council, said as much.

Mr Singh, a former Paralympian who competed in the 1988 and 1992 editions, pointed out that para-events are usually divided into categories based on the type of disability.

He also highlighted that Yip had direct entry into the final against six competitors - compared to Schooling's battle with 42 other swimmers in the heats, semi-finals and final.

Said Mr Singh: "The pool of swimmers you are up against is smaller. And each event, say a 50m breaststroke, would have more than one winner. So mathematically, we have to tailor for that."

This point was accepted by Aishah as "fair", but she was quick to point out that every para-athlete sent to the Games is still an elite competitor.

"Every country still picks and sends their best. Be it against 50 or 30 rivals, you still have train hard and be at your best to win," she said.

Para-swimmer Yip Pin Xiu hopes her victories will give a boost to disability sports here.

Echoing her sentiment was chef de mission Ho Cheng Kwee, who said he hoped to see more people from the disabled community taking up sports.

"If we can broaden the base of para-athletes that we have, we will have more talent to draw from. More can then go into the elite programme and compete," he told The New Paper yesterday.

Although he is satisfied with the current level of funding, he hopes for an increase from both the Government and private sectors to take disability sports to the next level.

The Singapore Disability Sports Council received $2.3 million in government funding last year, up from $1.06 million in 2005.

Its vice-chairman, Mr Raja Singh, said the council would plan its next course after the Paralympics.

"We have to sit down and discuss where to go from here. We have to plan for development, teach people, and have a proper pipeline.

"Right now, we are very happy for Pin Xiu and we hope that she, as a role model, will move more people... to play sports," he said.

"I am proud to see both Yip Pin Xiu's and Theresa Goh's hard work and perseverance come to fruition in their medal haul. I hope to see equal recognition and support for all our athletes, regardless of abilities," said Ms Chia, who is also the president of the Society for the Physically Disabled.

How gold medal winners are rewarded