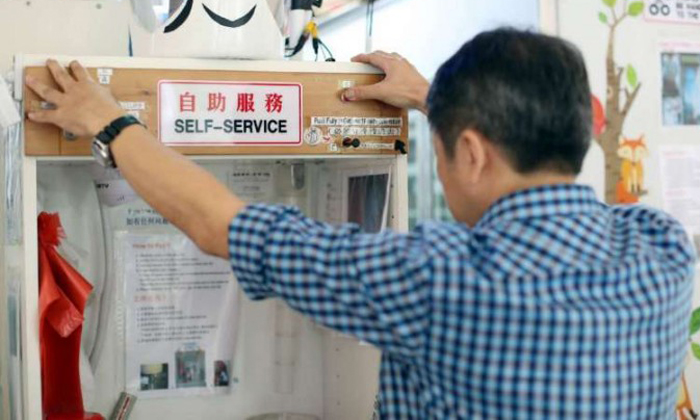 "We make honesty our way of life," reads a banner at a provision shop in Hougang, where customers pay for their own items and give themselves change.

And "honesty" is the operative word, for the cash-only store has no cashiers, security guards or any staff present.

The shop is at the void deck of Block 242, Hougang Street 22, Lianhe Wanbao reported yesterday.

It visited the unique store and found a makeshift cash register, a few closed-circuit television cameras and a number for customers to call.

When contacted, shop owner Alex Song, 54, told Wanbao that he took over this provision shop in June last year.

It was originally staffed by his family members. But three months in, he found that neighbouring competition was fierce and foot traffic was low.

He decided to cut costs and "automate" the shop, but was worried that the goods might be stolen, and so placed only some snacks and drinks for sale outside the shuttered shop.

After this "test" proved successful, he raised the shutters and let customers enter the outlet to shop.

He also created a payment system in which they could insert notes and coins and get change, according to instructions laid out.

But not all customers are honest, said Mr Song, who has about $50 worth of goods stolen every month.

To combat this, he prints images - from his eight CCTV cameras - of the thieves and puts them up at the cash register to "expose them".

"Luckily, it's only about 2 per cent of customers who leave without paying. Most people will pay," he said.

Every night, he tallies the books and refers to the CCTV footage when there are discrepancies.

Mr Song said he has made a police report only once - when a teenager stole loose change from the cash register.

The business model has invoked curiosity and seems to be a viable one, he added.

He plans to move his shop to a busier area and "test his faith in humanity".

provision shop with no shopkeeper