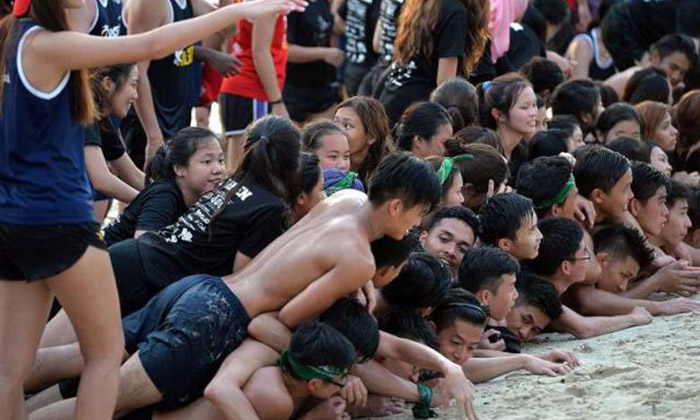 The brouhaha over university orientation camps and whether they have become too "sexualised" has sparked a fierce debate.

The issue prompted the National University of Singapore (NUS) on Friday to suspend all such camps.

Many undergraduates are upset. They said they are old enough to decide what is appropriate for them, and do not need parents and the authorities breathing down their necks. They added that most activities follow guidelines, and while some "black sheep" push the limits of good taste - it is not fair to tar everyone with the same brush.

But there is some concern over these camps after a New Paper report highlighted how the activities include re-enacting rape scenes. There were also complaints about sexually suggestive cheers such as "itai itai yamete", which in Japanese means "it hurts, it hurts. Stop".

Acting Education Minister (Higher Education and Skills) Ong Ye Kung weighed in on the issue on Wednesday last week, and called some of the activities "reprehensible".

On Tuesday, NUS said it would take "strong disciplinary action" against those found responsible, and added that it did not "condone any behaviour or activity that denigrates the dignity of individuals, and that has sexual connotations".

But after student leaders were briefed on what was acceptable at the camps, a video showing a male and female getting dunked in a pond in Sheares Hall still surfaced online. Then came the suspension, affecting six NUS camps.

Two student groups - the G Spot from Yale-NUS College and the Gender Collective, an independent group from NUS - in a joint statement said students were "disappointed". "To suspend all (student-organised) activities is... no less than throwing the baby out with the bathwater and will negatively affect the experiences of all incoming freshmen."

An NUS graduate, who was part of the organising committee for a hall camp in 2012, said the Office of Student Affairs (OSA) imposes strict rules for camps, and there is the added threat of suspension or expulsion. Activities are also vetted.

A Singapore Management University (SMU) spokesman also said rules on separate sleeping arrangements between males and females during camps are strictly enforced, and there are also guidelines that ask that physical contact between the sexes be kept to a minimum during activities.

Freshmen who have attended university camps in the last two months said the bulk of activities usually involve team-building games. Those involving physical contact do not have sexual overtones. But what happens after "official" orientation activities ends every day is tougher to control, the graduate said. This is when groups decide on games such as "Truth or Dare", which involves forfeits.

These include things like making a girl perform a pole-dance in front of a boy, or answering questions such as who in their group they would prefer to sleep with.

A female undergraduate who attended a hall camp last month said one game involved a catwalk session, in which groups design their own costumes. One male undergraduate was topless, and had a ketchup bottle positioned at his groin area. This sort of thing made her uncomfortable but the rest of the camp was fine, she added.

Orientation leaders insisted that those uncomfortable with any event can sit it out. A third-year NUS student, who wanted to be known only as Karen, has attended five camps as a freshman and a senior.

She said perceptions of university games being sexualised should not extend to the whole of NUS. "When the activities require forfeits, seniors will not force a freshman to do them if they are shy." Another student who attended a NUS faculty camp said when a girl was uncomfortable with doing the pole dancing, two guys decided to do it instead.

"It's supposed to be amusing, and I don't feel like there were negative undertones as the focus was on bonding. It is the orientation leaders' responsibility to set the boundaries clearly."

A freshman at SMU's School of Social Sciences, said she was asked during camp to answer who in her group she would have sex with.

"I took it very lightly. We bonded really well, we shared jokes, we were able to tease each other." If anyone felt uncomfortable answering a question, the group would choose another question, she added.

But some undergraduates said it is sometimes difficult to say no.

A third-year Nanyang Technological University student who attended a camp run by a club in 2014 said she was labelled "uptight" when she criticised games that "reinforced the viewpoint that all females are damsels in distress".

She said: "During Secret Pal, all the girls had to do was to doll up and sit in their own chalets, while the guys needed to perform tasks before they were allowed to meet the girl for a 'date'."

Mr Delane Lim, chief executive of Agape Group Holdings, which conducts talks and youth camps in schools, said peer pressure is a very serious issue. "Young people sometimes don't have the courage to say no because they are scared to be labelled conservative or 'chicken'."

Dr Raymond Cheong, from the Children/Youth Learning and Counselling Clinic, said youth who feel very awkward in social situations or who have been bullied in the past may continue with games despite their discomfort with them because they are afraid of being ostracised if they opt out.

"We should respect others. Some people may not complain, but they may not be okay with (the activities)."

There also seems to be some confusion on the role of such camps. Are they to allow people to get to know one another as part of networking efforts, or are they to encourage both sexes to get more comfortable with each other?

Student leaders said they were urged to include activities that had a better mix of males and females, and which involved a certain level of interaction - but not "inappropriate physical contact".

Responding to queries from The Sunday Times, the SDN said it has stopped funding university camps and events since January this year.

But one NUS graduate said such sponsorships meant some organisers "felt compelled" to include activities that get both sexes to touch each other "more".

The use of cheers and activities that touched on rape was especially worrying, experts said.

Clinical sexologist Martha Tara Lee said the instances of lewd and disrespectful games could be partially due to the lack of comprehensive sexuality education that emphasises consent.

"Since sex is considered a sensitive taboo, making exaggerated shows of bravado about sex might seem 'adult' but in reality, it is an overcompensation of their own ignorance and discomfort around sex," she said.

Reports on games or forfeits that take on a sexual slant - such as guys doing push-ups over girls - go as far back as 2008.

The G Spot and Gender Collective urged NUS to introduce long-term measures "to foster a culture of respect and consent" to help address the underlying issues.

These include a workshop on understanding consent, sexual respect and violence, and developing a more rigorous feedback mechanism between students and staff.

Still, the idea of too much oversight has upset undergraduates. Even before the suspension, and after the issue was highlighted in the press, one student organiser of an NUS Arts and Social Sciences hall camp said he was told that games cannot involve any body contact.

For instance, a game in which boys and girls had their hands tied together was scrapped.

"It's not really that the games were that bad. It's just that, with the negative press lately, they felt, better safe than sorry," said another student organiser.

An SMU fourth-year student said: "Such rules are a desperate move to pacify parents. People at university are adults. If there are staff members keeping watch all the time, you will be micro-managing students. What is the point of organising activities yourself?"

In this game typically played on the beach, students sit in a line, with their legs over the thighs of the person in front of them. They have to try to move from the shore to the water.

A student stands on an elevated platform, turns around with his back facing a group and deliberately falls. The group has to catch him to break the fall.

Both sexes are blindfolded and paired up to interact with each other one on one.

They are sometimes subject to a series of tasks, such as washing each other's hair before their identities are revealed.

They may also go on "dates" after that.

A game forfeit that is usually for a male and female. Some may opt to do it with someone of the same gender if they are uncomfortable.

The female has to lie on the floor while the male says "kor kor (big brother) coming". She responds: "Mei mei (little sister) don't want."

A cheer in Japanese sometimes used by groups.

An informal game that is usually played within the group after a day's orientation activities. Participants are asked difficult questions about others in the group such as "Who is likely to drop out of school?" or "Who is unlikely to get married?"

Sometimes played as a precursor to the Burning Bridges game.

Participants are asked questions about others that are more flattering, such as "Who is the most likely to become a millionaire?"