Orientation camp not all bad: 'I found my life partner' 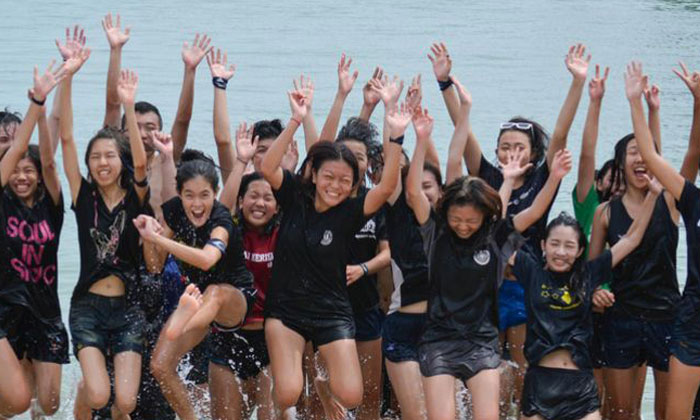 Are freshman orientation camps really that bad? Hariz Baharudin (harizbah@sph.com.sg) speaks to those whose lives improved after attending such camps

All kinds of questions ran through their heads when they arrived for their freshman orientation camp at the National University of Singapore (NUS) in 2011.

The thought of spending five days with complete strangers made Nick and Norah (not their real names) nervous.

Nick tells The New Paper on Sunday: "It is a scary time, and freshmen enter school not knowing many people and not having friends."

But the pair, who want to remain anonymous, say they are thankful for the camp as they met each other.

A year after the camp, Nick and Norah became a couple, and they got engaged late last year.

Norah says with a shy laugh: "If it wasn't for the arts camp, I would not have met him, and I am so glad I did."

They attended the annual arts camp in NUS - the same one where games were reported last week to have been sexualised.

The camp brings together about 400 students from the more than 18 different majors in the Faculty of Arts and Social Sciences as they play icebreaker games and are introduced into university culture.

"In camp, it is usually about getting to know people fast," says Nick.

"Once class starts, it is not easy to meet people to hang out with in school, to eat with or to do group projects with."

Nick, a communications and new media student, remembers bonding with his fiancee over their mutual interest in photography and coffee.

He says: "We started talking as friends and discovered we had a shared passion for quite a few things."

The arts camp is packed with a schedule of games and activities.

Norah recalls a game where they were partnered on the beach.

She says: "He had to carry me on his back, while I threw water balloons in the sea, which resulted in a series of awkward accidents.

"We were so clumsy, and we fell. Plus, he said I was heavy!"

When Nick was hospitalised for appendicitis shortly after, Norah rallied their friends to visit him.

"It was a good support group to start university with, and it was all thanks to arts camp," says Norah.

Throughout their first year in NUS, the pair got to know each other better through texting and eventually going on dates.

Four years of dating culminated in last October, when Nick proposed to Norah.

When pressed for details, Nick bursts into laughter before recounting the experience.

He says: "I wanted it to be special. She was a geography student, I wanted to be unique."

Before he popped the question with a diamond ring, Nick surprised Norah with a different kind of rock.

He had just finished travelling in the US and gifted her the rare rocks he had bought there, including a tektite rock that forms only when a meteor strikes the earth.

"It was so thoughtful, and I was so touched that I was crying till I became a mess," recounts Norah.

On NUS' suspension, Nick says: "I am sad this happened. Of course, sexualising games is wrong, but it is not fair to impose a blanket ban just because of a few black sheep.

"It will be denying future generations something so good and important to university life."

From camp to overseas volunteers

Most people leave orientation camp with friends to spend their years in university with.

But Mr Hazzely Mohammed Jufferie made friends who took him places.

Together with three friends he made in his hall-of-residence's orientation camp, the 29-year-old civil servant has been volunteering in Cambodia for the past four years.

Mr Hazzely tells The New Paper on Sunday: "I never thought I could find a group of friends who shared the same passion with me. It was thanks to camp that we grew close."

After attending the camp at the Nanyang Technological University (NTU), the then-economics major joined Maxar, his hall's community involvement group.

But that was not enough for Mr Hazzely and his friends. They decided to take Maxar overseas and founded Imaxar.

"We were doing great fund-raising for local beneficiaries, but as time went by, we wanted to do something different and looked out of Singapore," he says.

Mr Hazzely and his friends started to suss out an overseas beneficiary to volunteer at and raise funds for.

They got in touch with Unacas, an orphanage in Phnom Penh and made the decision to travel and help the children there in their third year. But starting a ground-up initiative like Imaxar proved to be challenging.

"It really was not the easiest thing. There were so many documents to process, safety precautions we had to take and courses we had to go through," says Mr Hazzely.

"Luckily, my friends from camp were there to make it happen."

Since Imaxar started in 2012, the group has been travelling to Phnom Penh to volunteer at the village.

When they were in NTU, they would gather about 20 other volunteers to help repair the orphanage, teach English to the students and raise funds for them.

Mr Hazzely says: "There is a sense of ownership to the project since we started it. We hope that in some way, their lives can be made better."

With the support of other sponsors and contributors like the YMCA, Imaxar raises more than $15,000 each year for Unacas.

Although they are no longer in school or part of Imaxar, Mr Hazzely and his friends still visit the school at least once a year to volunteer.

Today, Mr Hazzely is thankful for the five-day hall camp that led to his project taking off.

"I'm sure that without the hall camp, we would not have met one another or been this close," he says.

"Definitely not close enough to start our volunteering project."

Camps - are they that bad?

Last week, the National University of Singapore issued a suspension of all student-organised freshman activities.

The blanket ban was decided after talk about the school's freshman orientation camps dominated news headlines.

Some students had felt coerced into taking part in risque games and cheers.

But I remember camp being very different five years ago.

I was slightly nervous when I arrived for my camp at the Wee Kim Wee School of Communication and Information - afraid of the things that I would be asked to do.

The five days were packed to the brim as we went on a campus-wide treasure hunt, played telematch games on the beach and cheered till our voices, and our dignity, ran out.

Of course, there were awkward moments.

The camp activities were designed for you to throw caution to the wind. It was embarrassing, but at least everyone was embarrassed together, fostering a sense of belonging to the group.

On one day, we embarked on a nationwide race that saw us playing charades in Hong Lim Park, putting up an impromptu performance at the Esplanade and running after one another in the most tiring game of capture-the-flag in East Coast Park ever.

But there was no strong-arming or bullying, and definitely no sexualisation at all.

My campmates were free to drop out of any activities they did not feel comfortable with, their boundaries were respected and their welfare was always prioritised.

Instead, there was a focus on building a sense of identity to the school and to each other.

For me, the best part of camp was when it ended. Not because I was glad for it to be over, but because I knew I was starting the next four years of education with a great support group.

Some will say that I got lucky, and maybe I did. The camp I went to had nothing inappropriate.

I cannot speak for camps that I did not go for and just to be clear, I think any kind of sexualisation of games is wrong - people should definitely not be forced into doing things that they do not want to do in camp.

But the concept of making friends is a valuable constant that all camps have.

The nature of camp, organising activities that occupy people for five days, served as the perfect platform to start conversations and get people to bond. Through the games we played and the embarrassing things we did, a sense of camaraderie was formed.

My campmates gave me the best possible start to university life. Not only did we attend classes and suffer through deadlines together, the friendships we made continue until now, after graduation.

It would be a shame to deny all incoming freshmen the opportunity to make friends and disallow them to craft their own support system.