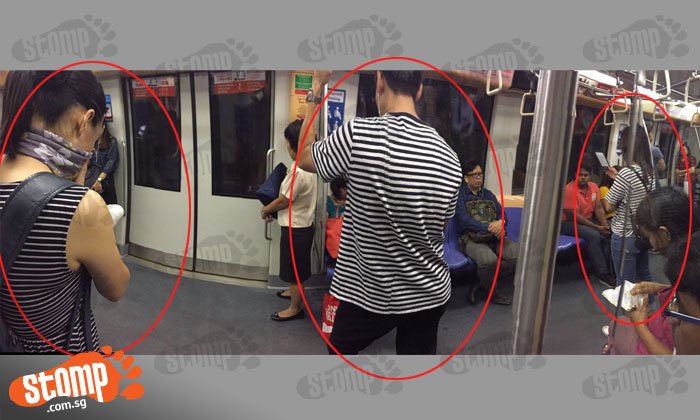 Why wear pink on Wednesdays when you can wear stripes?

Stomper Lau Lup was on board the North-East line this morning (Oct 26) when he was amused by three commuters wearing similar striped tops in the same cabin.

"I find it's very funny! When I saw the first guy and girl, I mistook them for a couple. But after spending some time to observe their body language, I realised that they were standing really far apart from each other, and just doing their own thing.

"That's when I knew they were complete strangers.

"The other lady boarded the same cabin wearing a similar striped top at another stop, and she was doing her own thing as well.

"At this point, the three of them really stood out to me."

According to Lau Lup, two of the three striped musketeers alighted at the same stop.

Related Stories
'Pregnant' men board train and ask commuters to 'give them some space'
Uncles at Tampines show how we just gotta let loose and have fun sometimes
Thug life: Cat hangs out at MRT station gantry like a boss
funny
bizarre
unusual
train
commuters