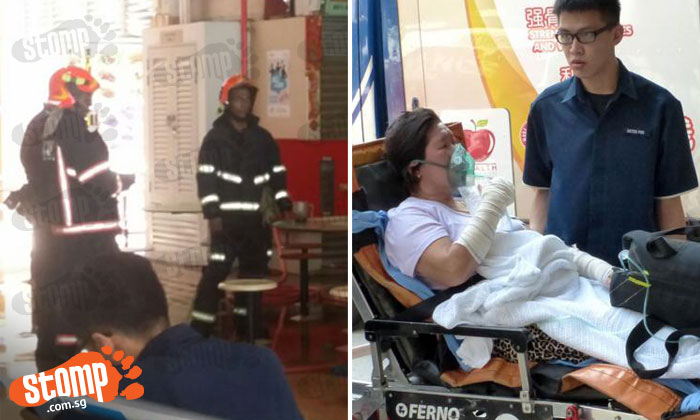 A fire broke out at a stall in Old Airport Road Food Centre two days ago (Aug 2) at around 10am.

Stomper Marquose who came across what happened sent photos showing the aftermath of the fire to Stomp.

The fire occured at Xin Mei Congee porridge stall as two Union Energy repairmen had been working on its gas supply.

The owners of a noodle stall and a kway chap stall in the food centre reported hearing a loud explosion 30 minutes after the maintainence work commenced.

The latter also said she heard a piercing scream following by clouds of black smoke.

"There were two workers there. The scream came from the worker who had been flung to the floor by the explosion", the 53-year-old told The New Paper.

Two Union Energy Corporation workers, their manager sustained and a 52-year-old worker at a fish porridge stall were injured by the explosion and fire.

Preliminary investigations revealed that the incident was "caused by a flash fire arising from repair works carried out on the gas supply to the food stall", said the SCDF on their Facebook page.

The hawker centre resumed normal operations in the afternoon after the fire was put out.