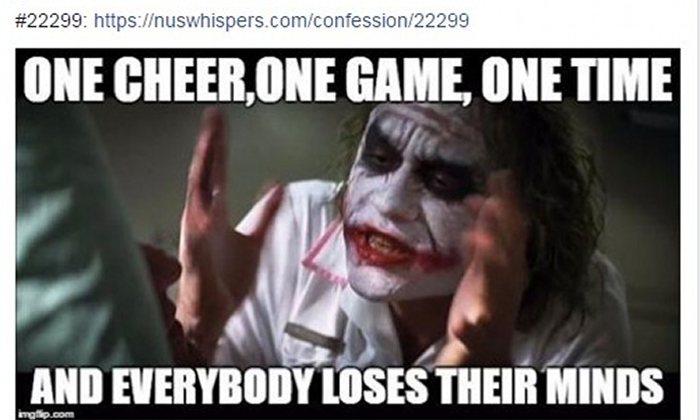 A recent report highlighting sexualised activities that freshmen were made to participate in at some of the National University of Singapore's (NUS) orientation camps have sparked a heated debate.

Two female students were quoted in The New Paper article about how they were asked inappropriate questions and made to recite cheers with obscene lyrics, while one of them also described having to watch an uncomfortable forfeit where a male and a female student had to act out a rape scene between a man and his sister.

Stomp and other media outlets have also carried multiple reports over the years about these increasingly sexualised orientation camps at local universities.

In March 2016, Stomper Anonymous also alerted us to another forfeit at a tertiary camp which he found inappropriate.

In a video sent to Stomp, a guy was made to do pumping exercises on top of a girl with his crotch in her face. Peers encouraged contact by pushing his body down and telling her 'not to cover her face'.

In a 2014 article, Stomper N said that students were made to take off their shirts at chalets.

Back in 2011, Stomp reported about a similar push-up forfeit at Singapore Institute of Management (SIM) University's orientation camp, which also generated much discussion. Guys were made to do the exercise while lying on top of girls.

In 2009, Stomper Kenneyboy46 also highlighted to Stomp about a lewd game at an Nanyang Technological University (NTU) orientation camp, which shows a girl eating bananas held at a position by a guy.

The whole saga has sparked a heated debate online and many students have also taken to voicing their opinions anonymously on the NUSWhispers Facebook page.

While some expressed their disapproval of having such sexualised games at NUS orientation camps, others slammed media reports for putting the institution in a bad light.

A few also said that they themselves have gone through the orientation camps where they actually had fun.

Claiming that the latest TNP article was 'biased', one netizen wrote, "If our camps were really so horrifying and uncomfortable, I doubt the atmosphere would be the way it is. I've been to several camps and I dare say, not a single one had the weird awkward atmosphere that would definitely be there if the participants were uncomfortable with the activities/cheers."

Similar sentiments were also made by other users about how the public is simply 'overreacting' and being 'narrow-minded' as well as how the orientation games are 'part of tradition' and 'what make camps fun'.

Memes have also been created to mock those who criticise the inappropriate games and camps.

However, there were also those who spoke out against these sexualised games and said the issue has been a persistent problem for years.

It was also reported that many attended the orientation camps as they wanted to make friends, but were uncomfortable with some of the activities. They did not speak out due to peer pressure and the fear of being ostracised.

One user posted on NUSWhispers: "Just sharing an anecdote: During a FOC in another local university (which was quite a while back), the head of the organizing committee 'warned' (though 'threatened' would not be an exaggeration) everyone not to leak out photos from the camp, especially those during 'forfeits' and SP activities.

"In her words, she said that what actually would go on during the camp would be very different from the PG things that were written in the proposal for camp for the university to approve.

"With the current drama abt FOCs, it's quite easy to infer what she (and the organizing committee) meant. The fact that they blatantly lied to the university and that they went ahead with the 'activities' they had planned which would have been disapproved by the university was quite unnerving, to say the least. Hopefully that's not the case in NUS now."

Another girl also wrote, "My own relationship has been ruined by such intimate games during orientation. My ex-boyfriend got hooked up with those girls showering him so much attention that he broke up with me just to be able to choose from the wide variety of girls throwing themselves at him. How can he and those girls do such an unfair thing to me."

Check out the gallery to see more posts from students on NUSWhispers.