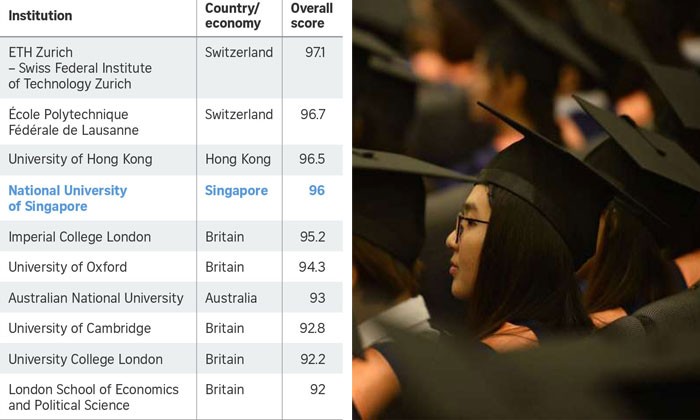 The National University of Singapore (NUS) was named the world's fourth most international university by Times Higher Education on Wednesday, edging out prominent universities from Britain and the United States with its diverse crop of students and researchers.

It ranked fourth on a list of 150 international universities, ahead of universities like Oxford, Cambridge and Harvard, but behind fellow Asian college - University of Hong Kong - which ranked third. Taking first and second place were Swiss universities.École Polytechnique Fédérale de Lausanne.

A university's international reputation, which makes up 25 per cent of the total score, was also included in the tabulation of the rankings for the first time this year. It measures the ratio of international votes to domestic votes through an invitation-only survey, which asks leading scholars to name the world's best universities for teaching and research in their field.

Professor Tan Chorh Chuan, NUS' president, said the university's fourth placing is a strong recognition of its global approach to education and research.

About 8 in 10 of NUS undergraduates get to study abroad, including semester-long student exchanges at 300 universities in over 40 countries. The university also collaborates with overseas universities to offer over 70 joint-, double- and concurrent degree programmes.

"In short, to enhance learning outcomes, we bring our students to the world, and we bring a world of learning to our students in Singapore," he said.

Prof Tan added that NUS welcomes high quality faculty and students from around the world, and already has staff and students from about 100 countries, which bring valuable academic expertise as well as different social and cultural perspectives to it.

Times Higher Education World University Rankings editor Phil Baty said: "NUS, and indeed Singapore more widely, has become a powerful magnet for international talent - drawing in leading thinkers and scholars from right across the world, and forming the base for exciting and dynamic global partnerships.

"NUS stands as the flagship of a true global knowledge hub."

He added that the "best universities in the world live or die by their ability to attract the brightest talent from all across the world", and that a university simply can not be world class without a global outlook, a global network and a global pool of talent.

Mr Baty, however, cautioned that changing attitudes and policies towards immigration across the world have the potential to "profoundly change the flow of global talent and shift the world balance of power", singling out the US and Britain, which are looking at tightening immigration laws.

"Restrictions to the mobility of academic talent in these countries will inevitably harm their position, while other countries welcome talented immigrants with open arms, and their universities strengthen," he said.

Times Higher Education list of the World's Most International Universities 2017 may be found in full here: https://www.timeshighereducation.com/features/worlds-most-international-...