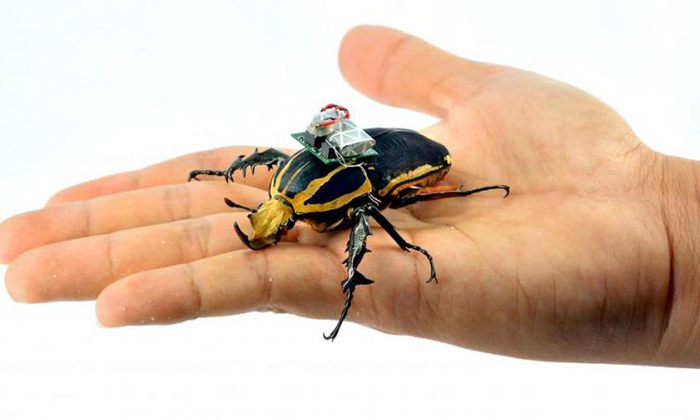 A project involving remote-controlled "cyborg beetles" by the Nanyang Technological University (NTU) and the University of California, Berkeley has drawn flak, with some netizens crying foul over the perceived insect abuse.

The joint project, first published in March last year, involves attaching a microchip to and inserting electrodes into a giant flower beetle's body to connect with its optic lobes and flight muscles - allowing people to control its movements via wireless signals.

Led by Assistant Professor Hirotaka Sato from the NTU School of Mechanical and Aerospace Engineering, the project was recently featured by US online magazine Motherboard.

A video of the story, which was uploaded onto Motherboard's Facebook page on Dec 1, has gone viral, with over 22,000 shares and more than 2,800 comments as of yesterday.

In the video, Dr Sato says the project's purpose is to "control the flight of the beetle", which will be used for "peaceful applications" like finding trapped people using heat signatures. Each muscle of the beetle is stimulated "like a robot". Dr Sato said: "It struggles, but it still obeys the signals."

Netizens expressed their disapproval on Facebook. User Alexandra Manda called the project "animal torture". Netizen Calvin Yap said: "If someone were to control a wasp or venomous invertebrates, he can commit a perfect murder."

But not all netizens were against the cyborg beetles.

Mr Marc Samuel Tan commented: "If it furthers research and helps develop future technologies that can potentially improve the way things are done, then I don't see why not."

A spokesman for the Agri-Food & Veterinary Authority, which regulates the import of insects, said it had approved the import of the beetles.

He added that the animal welfare provisions of the Animals and Birds Act do not cover invertebrates such as beetles.

The Animal Concerns Research and Education Society (Acres) and Nature Society (Singapore) (NSS) have also weighed in on the cyborg beetles.

Said deputy chief executive of Acres Anbarasi Boopal: "With the advances in technology, use of live animals for such purposes should be replaced by use of technology to avoid suffering."

Said Dr Jain: "Would we one day allow the use of the same technology to control higher animals and people?"

Though Singapore's ethics for animal experimentation guidelines do not apply to invertebrates, Dr Sato said the research was carried out with "utmost care for the beetles to ensure it does not cause any harm".

The beetles, he said, continued to live out their regular lifespan of three to six months.