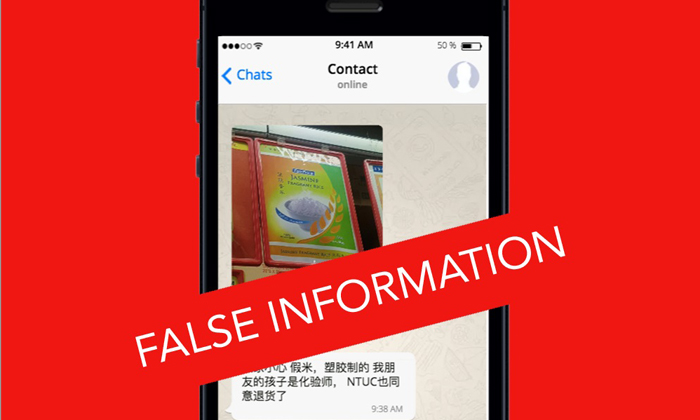 A police report has also been lodged.

Rumours circulating on social media and messaging platforms alleged that FairPrice Jasmine Fragrant Rice was made of plastic and claimed that this was confirmed by a chemist.

Some messages also claimed NTUC FairPrice had agreed to withdraw the product -- which it has carried for over 10 years -- from all of its stores.

"We’d like to assure all our shoppers that our rice is 100% safe for consumption, and have passed stringent safety checks by the authorities. We would like to advise the public not to further circulate this malicious rumour."

NTUC FairPrice will also be putting up notices at its stores to inform shoppers of the hoax.

"FairPrice would like to assure all our shoppers that our rice is safe for consumption, and has passed stringent safety checks by the authorities."

Mr Kor also advised the public to stop circulating the false information which might cause unnecessary alarm.

In addition, the Agri-Food and Veterinary Authority (AVA) said it has not detected cases of fake rice in Singapore.