NTU Confession: Guy thinks grades don't matter only for the rich and beautiful 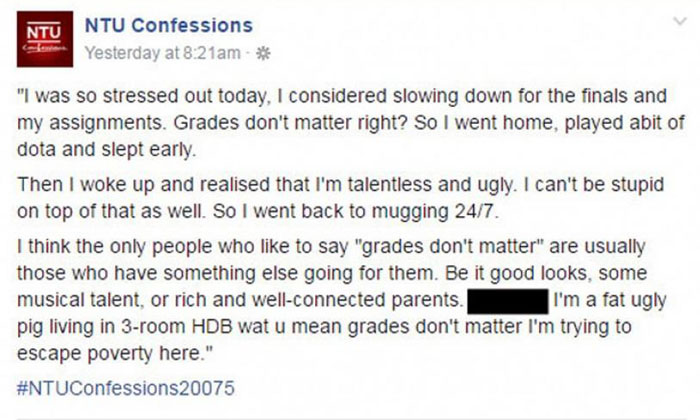 Hard work is widely accepted to be the Singaporean cookie cutter way to success.

Yesterday (Nov 16), a student confessed how he felt resigned to this ideal method of surviving on Nanyang Technological University's Confessions Facebook Page.

He mentioned how he took a day off, going home to play a video game before sleeping early.

He claims he did not study, or do anything remotely related to his studies.

However, when he woke up the next morning, he said he realised that he was "talentless and ugly" and could not afford to be "stupid", and so went back to studying "24/7".

He thinks the people who can afford to say "grades don't matter" are usually those who have "something else going for them", such as good looks, musical talent, or rich and well-connected parents.

He says grades matter to him because he is "trying to escape poverty".

The post elicited positive responses from netizens, who told him to "stay strong" and that "you won't know where your talent lies unless you explore".

One even quoted Michelle Obama: "Living without privilege makes you stronger".

However, there were also posts which sympathised with him, saying "that's right" and "I feel this guy".

What do you think? Do grades really matter so much?