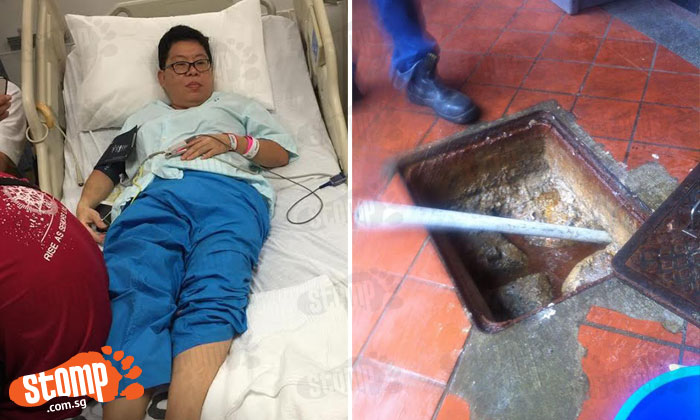 Stomper Tan's 50-year-old mother fell into a drain in Chinatown and he is frustrated that no one is taking responsibility for the incident.

According to a police report of the incident that took place on Oct 14 at around 12.30pm, the Stomper's partially blind mother was walking along a pavement when she fell into an uncovered drain at 29 Smith Street.

Instead of barricades or signs to inform people that works were going on, two chairs were placed beside each other on the pavement to alert passersby about the drain.

The Stomper's mother however walked past the chairs without knowing what they were for and fell into the drain that was around 25cm deep. She was then helped up by nearby workers.

Following the incident, the manager of Chinatown Food Street, a nearby eating area, arrived at the scene and informed the Stomper's mother to contact Bio-Care Grease Control, the company that was in charge of the works at the drain.

According to the police report, no help was offered by the company and the Stomper's mother was told to contact Chinatown Food Street instead.

The 50-year-old is currently warded at Tan Tock Seng Hospital due to injuries sustained from the fall. She is awaiting an MRI scan to determine the extent of her injuries.

Other than making a police report, the matter has also been brought up to the Ministry of Manpower.

Related Stories
Woman lies on walkway after getting knocked down by bus at Balestier Rd
Worker injured after falling through rubbish chute at Queenstown HDB block
More About:
accident
Chinatown
injured
hospital
fall