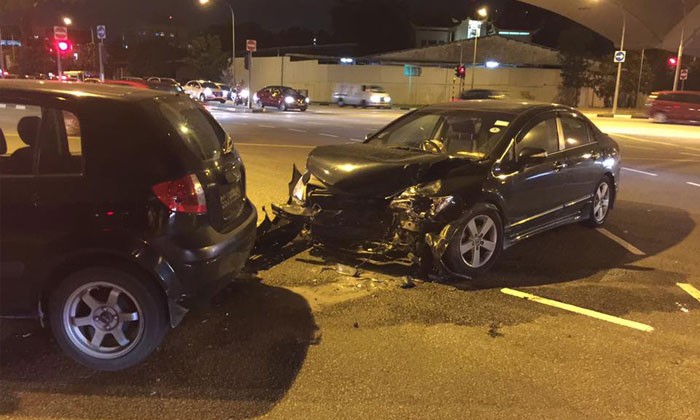 A car accident on Wednesday (Nov 30) saw three from a family of six taken to hospital, including a nine-month-old toddler.

The accident occurred at the junction of Bartley Road East and Airport Road at 7.25pm, Shin Min Daily News reported on Friday (Dec 2).

Quality assurance manager Kenny Tan, 39, whose car was allegedly hit, told Shin Min that he had been on the way for dinner with his wife, parents, two-year-old son and nine-month-old niece when the accident happened.

He was at the Kallang-Paya Lebar (KPE) Expressway's Bartley Road East exit when the lights turned green for vehicles turning right, he said.

"I drove on, but a car suddenly dashed over from Bartley Road East and hit mine," said Mr Tan.

He added that the impact was "quite big", injuring his niece's head and his father's chest.

A police spokesman told The Straits Times on Friday (Dec 2) that a 71-year-old man and 64-year-old woman were taken to Changi General Hospital, while a nine-month-old female toddler was taken to KK Women's and Children's Hospital.

Mr Tan told Lianhe Wanbao in a report on Friday (Dec 2) that the driver of the oncoming car was in his 40s, and was with another male passenger who was about the same age.

He added that the driver stayed at the scene.

"He kept apologising to me and said he was too tired from working, so he kept rubbing his eyes," said Mr Tan. "When he opened them, the cars had crashed."

In a Facebook post after the accident, Mr Tan appealed for eyewitnesses with in-car camera footage to come forward.

Mr Tan told The Straits Times that his family members had all been discharged and did not have any major injuries.

He said that they were "really lucky" that the impact was absorbed by the front of the car and not on the side.

No one has come forward with footage of the accident yet.