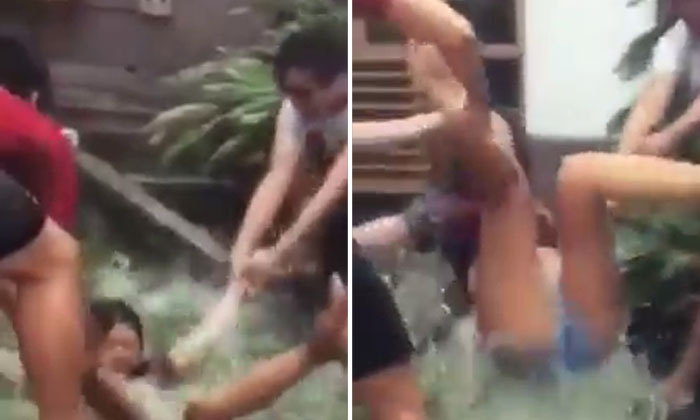 According to All Singapore Stuff, the incident took place on Jul 27 during a camp organised by NUS.

The first part of the video shows a group of four students holding the limbs of a freshmen and dunking him repeatedly into what seemed to be a pool or a pond.

This was then repeated on a female participant.

The freshmen were face-up throughout the process and had no way of covering their faces or noses while they were being dunked as their hands were being held.

The second part of the video shows a group of male participants crawling topless on a concrete floor filled with powder.

The game masters were shouting Hokkien obscenities throughout the activity.

Inappropriate and highly-sexual games over the years

Many similar cases at polytechnics and universities have been reported on Stomp over the years.

In March 2016, Stomper Anonymous also alerted us to an inappropriate forfeit at a tertiary camp. In the clip sent to Stomp, a guy was also similarly made to do pumping exercises on top of a girl, this time with his crotch in her face. Peers encouraged contact by pushing his body down and telling her 'not to cover her face'.

According to an NUS blog, camp facilitators in 2014 have made girls lick whipped cream off a guy's chest or neck -- after he was stripped to his shorts before being blindfolded and bound with tape.

There was also a sexual-themed activity called 'Secret Pals'. “They wake the participants up at 3 a.m. and blindfold them, and make the girl sit on the guy’s lap," an organiser said

Other games include passing MnM chocolates to each other using only their mouths.

Stomper N also wrote in in 2014, where students were made to take off their shirts at chalets.

Back in 2011, Stomp reported about a push-up forfeit at Singapore Institute of Management (SIM) University's orientation camp, which also generated much talk. Guys were made to do the exercise while lying on top of girls.

In 2009, Stomper Kenneyboy46 also highlighted to Stomp about a lewd game at an Nanyang Technological University (NTU) orientation camp, which shows a girl eating bananas held at a position by a guy.

In 2006, The Straits Times  reported that activities involving lip contact and the washing of armpits also at NTU.

According to AsiaOne, students at NUS and NTU said their camps feature more risque forfeits, while Singapore Management University (SMU) students said theirs were milder.