Netizens identify woman who allegedly ran over dog at Pasir Ris Farmway 3, told owner 'f*** you' and drove off 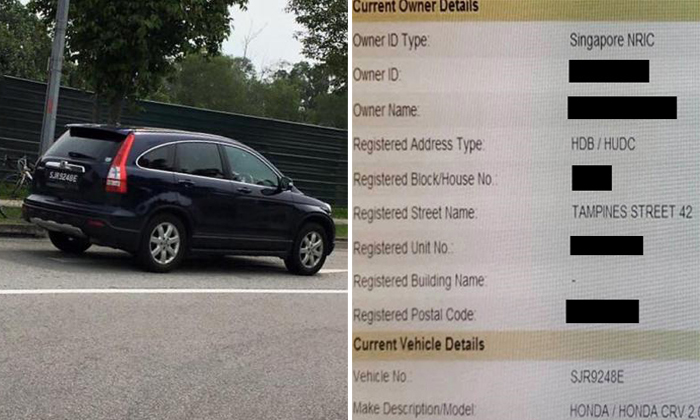 The female driver who allegedly ran over a dog at Pasir Ris Farmway 3 at 10.45am on Oct 23 has apparently been identified by cyber sleuths.

It was earlier reported that woman, who was driving a Honda with the licence plate number SJR 9248 E, had rolled over the dog, Sayang.

According to Facebook posts by Animals Lovers League (ALL) and volunteer Lixin Tan, the driver was stopped by witnesses who asked her to help them with the injured canine.

However, she allegedly told them,"F*** you. It's just a dog," before driving off.

The incident sparked outrage online, with netizens starting a witch hunt for the culprit.

A commenter on Lixin's post responded with a screenshot showing the driver's details, after having apparently paid to extract the information based on the vehicle's licence plate.

The driver is believed to be a property agent who lives at Tampines Street 42.

Others have also been sharing her personal information such as where she works and her mobile number.

Lixin later clarified in her updated post, "We are trying not to speculate if the driver had intentionally run over Yang despite how the incident played out, but it remains a fact that she had not stopped to render her assistance and that in itself is a crime."

Yang has been examined by a vet and is found to have no internal injuries, though it is suspected that he might have hurt his head.

Earlier, ALL said that they would be pursuing the case with the Agri-Food and Veterinary Authority of Singapore (AVA).

Related Stories
Woman allegedly runs over dog at Pasir Ris Farmway 3, then says "f*** you, it's only a dog" to owner and drives off
Do you know this uncle? SPCA is looking for him in relation to alleged monkey abuse at Woodlands Waterfront Park
Pet grooming school owner who abandoned 18 dogs jailed and fined $65,700
Pet grooming school owner charged with abandoning 18 dogs, keeping 28 without licence
Cat with mangled paws found in Yishun: Volunteers plead for help
driver runs over dog
animal abuse
dog
accident
road bully
injured