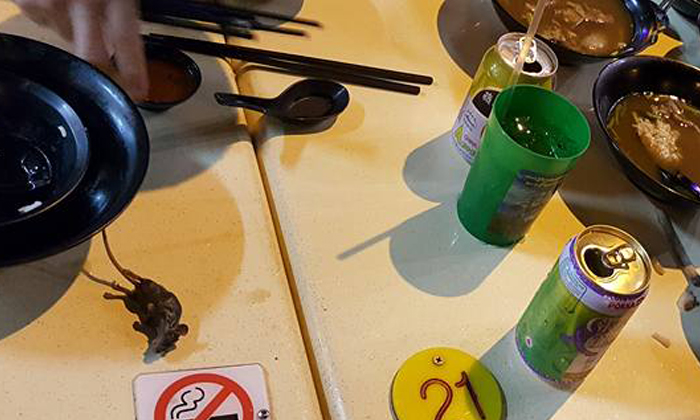 The National Environment Agency (NEA) has responded to an incident whereby a patron said that he found a dead rat in his mutton soup from a stall along Sam Leong Road in Jalan Besar.

Stomper Melvin had alerted Stomp to photos of the incident on Facebook, posted by user Quek Yong Pheng.

Quek wrote in his post: "Bad experience with this stall from today... Having dinner with 'Mickey Mouse' inside the mutton soup..."

When contacted by Stomp, Quek said that the stall owner had offered him a refund and told him that the rat might have "dropped down from the wire above."

In response to media queries by Stomp, a spokesperson for the NEA said:

"The National Environment Agency (NEA) is aware of the Stomp report and is currently investigating the incident.

"We will take the necessary enforcement actions against any parties found responsible for rat infestation, or creating conditions favorable for harbourage or proliferation of rats."

Operators of food retail establishments found with hygiene lapses, including failure to keep the licensed premises free from pest infestation will be liable to a fine not exceeding $2,000, and demerit points will be issued.

If a licensee accumulates 12 demerit points or more within 12 months, his licence will either be suspended for two weeks or four weeks, or be revoked, depending on past suspension records.

Related Stories
Yikes, this is not a 'sour plum' in his juice as a Stomper originally thought
Stomper spits out 'snail' while having laksa at Potong Pasir coffeeshop
Look what diner found in fishball noodles at SGH food court
Woman sent to hospital for nausea and vomiting after finding centipede in meal at Century Square
More About:
official response
unhygienic
disgusting
food
rats
rat