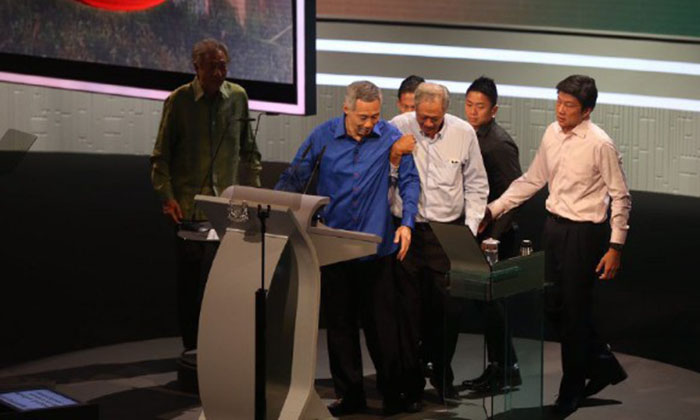 Update: The National Day Rally will resume at 10.40pm.

The PMO updated in a statement that PM Lee was feeling unsteady because of prolonged standing, heat and dehydration. His heart is fine and he did not have a stroke.

He returned to the stage to a standing ovation, and said, "I will have a full check-up after this."

Viewers were shocked when Prime Minister Lee Hsien Loong looked like he was about to faint halfway through speaking during the National Day Rally tonight (Aug 21).

During the live broadcast by the Prime Minister's Office, PM Lee seemed to be wavering as he spoke. The camera quickly panned to the crowd when he stumbled and held onto the podium.

The crowd stood up and looked shocked, then clapped when the minsters helped the prime minister off stage.

"Pm looked like he was about to pass out right before the camera cut out. Edit: Looks like the rally has been suspended."

Comment from discussion What the hell just happened during the national day rally?.

According to a PMO statement in a tweet, PM Lee 'took ill' during the speech and a medical team is attending to him now. They assess his condition is not serious.

The National Day Rally can be watched here on PMO's live broadcast:

According to The Straits Times, Deputy Prime Minister Teo Chee Hean told the audience that PM Lee will continue the speech later.