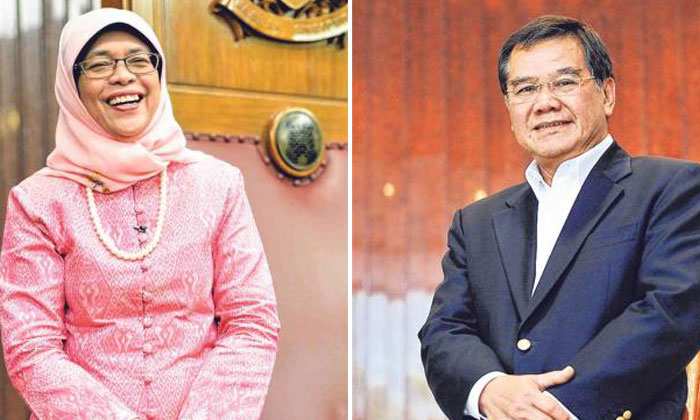 Community leaders and observers cite two prominent figures from the community: Speaker of Parliament Halimah Yacob and former Cabinet minister Abdullah Tarmugi, who was speaker from 2002 to 2011.

Observers say both tick all the boxes of the eligibility criteria for those from the public sector, having spent at least three years in key public offices.

PM Lee was speaking during the debate in Parliament on changes to the Constitution to ensure minorities are represented in the elected presidency from time to time as the office is a symbol of the nation's multiracialism.

Singapore has not had a Malay president since first president Yusof Ishak, who died in office in 1970.

She is widely seen as a front runner. But when asked if she had given the matter thought, she told The Straits Times: "My paramount consideration is service to Singapore, which I am doing by wholeheartedly focusing on my current responsibilities."

"Regardless of our position of service, it is more important to stay focused on the same core mission, which is to do our best for Singapore," she added.

Asked if he would run, Mr Abdullah, part of a nine-man Constitutional Commission that reviewed the Elected Presidency, said he has not given it serious consideration.

But several friends have encouraged him to do so.

"I'd be lying if I say that friends have not been asking me about it. I suppose that is to be expected. If you look at the people who qualify, it is not that big a pool," he said.

"But when my friends suggest that, I tell them: Hold on, hold on... It is still early days yet. And I got to think of my own preferences, my life, my family, and my privacy. This is not a journey I take myself."

Dr Yaacob said in a Facebook post last Friday: "When the time comes, I hope qualified Malay candidates will step forward to serve all Singaporeans."

He added: "We must ensure that the best qualified person who reflects the values and ethos of our nation will be elected to the highest office of our land."

Observers say he may qualify under the "deliberative" track, which allows the Presidential Election Committee to consider candidates who do not meet the criteria, but have comparable experience and ability.

When asked about such a possibility, Mr Masagos said: "I don't lose sleep over that. Keeping racial harmony in working condition - that's what I worry about."