Mystery man helps put out fire at Block 59 in Lengkok Bahru, then disappears 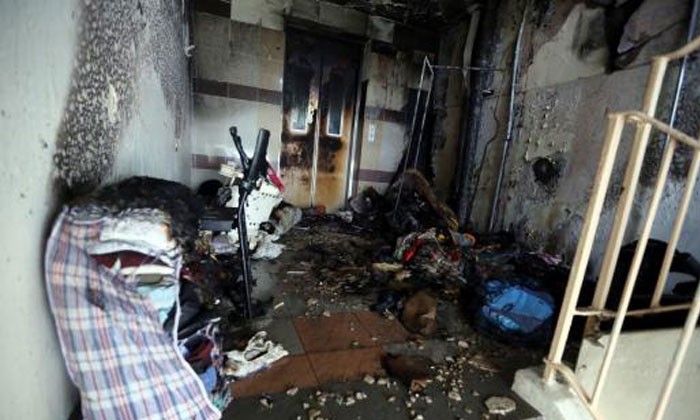 Mr Peter Lim, 66, was going to work when he noticed a fire at the lift landing between the third and fourth storeys of Block 59, Lengkok Bahru, off Jalan Bukit Merah.

He rushed to the third storey to alert residents. But a man in a blue shirt was already banging on the door of the unit closest to the fire.

The mystery man then helped to put out the blaze before vanishing.

A video of the fire was posted yesterday on Facebook by Madam Suhaini Ali, who saw the incident as she was sending her child to school.

He told The New Paper: "He alerted the residents. Then we and three residents put out the fire."

Sales exhibitor Teng Hau Hin, 46, who lives on the third storey next to the lift landing, was awoken by his wife at about 7.30am after the man in blue alerted her to the fire.

The couple and their 14-year-old daughter joined Mr Lim and the man in blue to fight the fire.

Mr Teng said in Mandarin: "We formed a human chain and passed 20 to 30 pails of water to put out the fire. It was big and there were three explosions. The floor shook. We were scared."

He said they put out the fire in 15 minutes.

The Singapore Civil Defence Force (SCDF) said it was alerted at about 7.40am and sent a fire engine, a Red Rhino and an ambulance.

No one was hurt in the fire, which involved discarded items.

Residents told TNP that there were piles of discarded items at the lift landing in the past few days.

Mr Teng said he had called the Tanjong Pagar Town Council about this.

But a town council spokesman told TNP it had not received any such feedback in the past three months.

She added: "However, this is no excuse for our workers to not remove discarded items in a timely manner.

"Our workers sometimes have problems identifying whether the items placed at the common area are to be discarded as some residents also place their personal items along the common area.

"We would like to seek our residents' assistance not to leave discarded items at the lift landing or common area as these can be potential fire hazards."

The police have classified the case as mischief by fire. Investigations are ongoing.