'My son was a tool for revenge': Estranged wife of Belgian expat who killed their 5-year-old only child 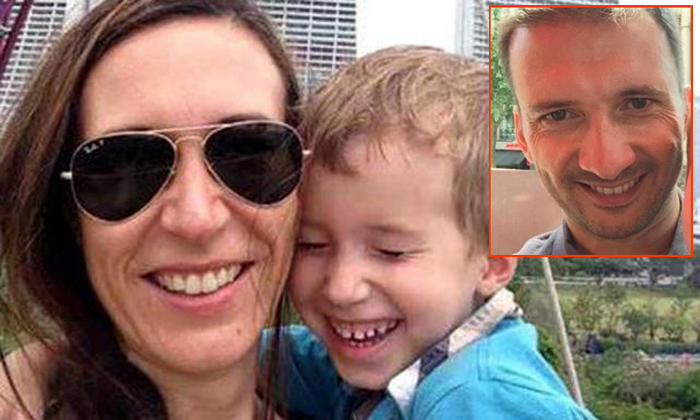 That was how Mrs Gwendoline Graffart reacted to the five-year jail sentence imposed yesterday on her estranged husband, Belgian national Philippe Marcel Guy Graffart, 42, for killing their only child, Keryan.

He was five years old when his father smothered him with a cushion before trying to kill himself on Oct 5 last year.

In a statement issued after the sentencing through her long-time friend, Mrs Fiona Miller, Mrs Graffart said she is still in a "state of profound grief and has been sentenced to a life of pain".

Calling the sentence "too lenient", the 40-year-old French national claimed that "the sole purpose of the (killing) was to hurt me as much as possible", and that her son was used as "a tool for revenge".

Mrs Graffart also alleged that recorded conversations between her and Graffart before the tragedy showed that he had repeatedly threatened her and their son.

While they were embroiled in a bitter divorce custody battle in April last year, she claimed that he told her over the phone: "If you take away my son, I will kill you."

She also alleged that he told her in a recorded voice message at the end of July: "I will kill myself with your son."

However, Graffart, who was Nordea Bank's head of fund distribution for the Asia-Pacific region, was assessed to be suffering from major depressive disorder at the time of the killing, which substantially impaired his judgment.

The initial charge of murder was amended to the lesser offence of culpable homicide, which he pleaded guilty to earlier this month.

In a detailed timeline sent to The New Paper, Mrs Graffart claimed the harassment by her husband began as early as 2014.

But in the months leading to Keryan's death, she said she saw a more drastic change in Graffart, especially after she was diagnosed with breast cancer in early June.

Not long after her diagnosis, she returned to France with Keryan, and underwent a mastectomy.

While she was there, Graffart allegedly continued the harassment and, at one point, sent his wife "325 texts of insults and threats" in 24 hours.

After intense pressure from him, Mrs Graffart said she was compelled to put their son on a flight to Singapore with a family friend.

Keryan lived with his father for about two weeks until Mrs Graffart returned to Singapore on Aug 6.

During those two weeks, she claimed that Graffart would coach Keryan to hurt her with insults over the phone.

She said in the statement that she had gone to the police and embassy officials in Singapore and France to try to obtain protection for herself and Keryan.

After her return to Singapore, she filed a police report before applying for a personal protection order (PPO) under the Women's Charter.

TNP was shown a copy of the application.

Pending the hearing for the full PPO, The Family Justice Courts granted her an interim expedited order as it was "satisfied that there is imminent danger of family violence being committed" against her and Keryan.

Graffart was ordered to restrain from "committing family violence" on his wife and son in the interim.

On Oct 2 last year, Graffart received his wife's written affidavit, which was scheduled to be heard at the Family Justice Courts on Oct 6.

On the night of Oct 5, Graffart smothered Keryan with a cushion before crashing his car in a bid to kill himself. He escaped with minor injuries.

Mrs Graffart said in the statement: "I should not have let Keryan stay there, but I never wanted to stop Keryan from having a relationship with his dad."

She has started an online petition in memory of her son.

She added: "It is a tragedy of the highest order, for myself and especially for Keryan.

"It is cruelty beyond measure, and from this day forward, I will be compelled to act, to fight for the truth for Keryan and for other women in the same terrible, nasty, black, helpless, horrible place."

He had earlier pleaded guilty to culpable homicide not amounting to murder.

The Belgian, 42, was expressionless when Judicial Commissioner (JC) Hoo Sheau Ping read out the sentence in the High Court.

JC Hoo said that the penalty was consistent with similar cases and the accused's action could not be condoned.

"This is a tragic case in which the life of a five-year-old child has been ended by his father in the midst of a custody fight, causing immeasurable pain and suffering to all those left behind," she added.

On Oct 6 last year, the police found the body of Graffart's son, Keryan Gabriel Cedric Graffart, in the master bedroom of Graffart's 32nd-storey apartment at D'Leedon Condominium in Leedon Heights.

Graffart had earlier told a police officer at the Bukit Timah Neighbourhood Police Centre that he had "done something bad" to his son.

The court previously heard that Graffart had smothered the sleeping Keryan with a cushion between 9pm and 10.17pm on Oct 5.

Graffart then tried to kill himself by ramming his car into a tunnel wall along Marina Coastal Expressway (MCE). He survived with minor injuries and was taken to Singapore General Hospital.

His son was pronounced dead by paramedics at 6.17am the following day.

A toxicology report found Zolpidem - a hypnotic medicine used to treat insomnia that is not recommended for children - in Keryan's blood.

Describing that night's events, Graffart wrote in a letter as part of his mitigation: "There (are) no words to say how sorry and broken I am by this tragedy. I lost my precious boy, Keryan, he was my life and my love, I was so proud of him. I never imagined this could happen."

Graffart was found to have been depressed over an ongoing custody battle with his French wife, Mrs Gwendoline Graffart, 40.

His lawyer, Mr Ramesh Tiwary, said the couple's relationship had deteriorated to such a level that Graffart began to feel he would not be able to provide Keryan with love and care.

His client had never touched or threatened Keryan before the night of the incident, he added.

"He had never warned or threatened that he would harm Keryan in any way," he said.

However, Mrs Graffart had applied for a personal protection order, and was granted an interim expedited order against Graffart on Aug 11 last year.

It restrained him from committing family violence against her and their son.

Mr Tiwary said Graffart had consulted four doctors but none of them had detected that he was emotionally and mentally unwell.

Mr Tiwary said: "The accused's (Graffart's) state of mind was such that he was clearly not thinking clearly and was very disturbed."

After the killing, an Institute of Mental Health doctor found Graffart to be suffering from a major depressive disorder.

"No doubt, the accused's major depressive disorder contributed to his decision to smother Keryan... There is nothing to indicate that he lacked the capacity to comprehend his actions or to appreciate the wrongfulness of his conduct," she said.

A report dated Nov 23 last year by a doctor who had examined Graffart stated that he "was cognizant of the nature and quality of his actions".

Citing the jail terms of similar offenders in previous cases, the prosecution recommended a sentence of between five and six years' jail for Graffart, who had been assessed to pose a low risk of danger to society.