My lucky day! Here's how I managed to get these popular 'shampoo bottle' milk tea 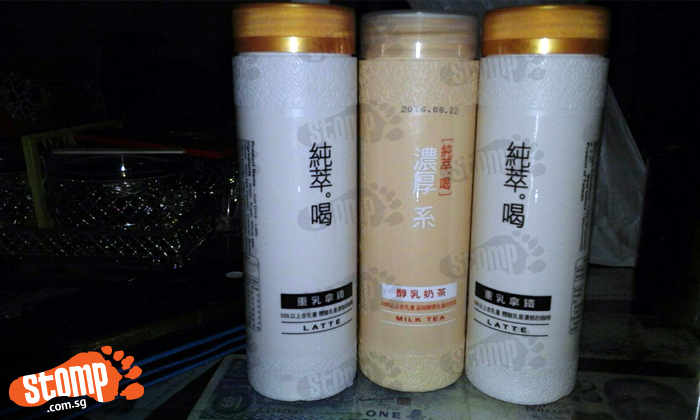 Stomper Farhan was pleasantly surprised when he managed to snag some 'shampoo bottle' milk tea at a 7-Eleven store in Balestier Road.

Believe it or not, all he had to do was to simply ask the cashier.

These milk tea drinks in unique shampoo bottles, which are originally from Taiwan , are Singapore's latest food fad.

Chun Cui He (純萃。喝), which is translated as 'Pure. Drink', became available in local 7-Eleven stores last month, where they were quickly snapped up and sold out.

Those who did manage to purchase the drinks reportedly had to either endure long queues or begin their search in wee hours of the morning.

However, Stomper Farhan's quest for the popular drink was a more simpler one. He told Stomp via WhatsApp:

"From 2am to 6.15am, I waited at McDonald's near the 7-Eleven at Balestier Road.

"Then three hours later, I went to another 7-Eleven at Balestier Road and I thought it was my lucky day.

"I asked the cashier if they've got any more of the latte milk tea. The cashier told me, 'You wait ah" then he went to the drink fridge and took some bottles out from behind the other drinks where they had been hidden.

"So if you want just drink milk tea/latte, please ask the cashier because you never know if you might be lucky and they could be just behind some other drinks inside the fridge."