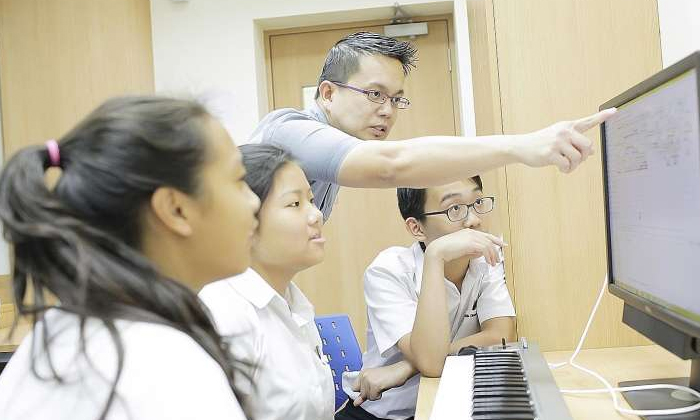 One of music teacher Philip Tan's favourite exercises is to ask students to randomly give him phone numbers. The digits are matched with musical notes that are strung together to create original melodies.

"Once students add rhythm, phrasing and harmony (to the melody), they are amazed," he said.

This constant search for creative ways to teach music is one of the reasons that Mr Tan, 43, is on a shortlist of 50 teachers to win the Varkey Foundation Global Teacher Prize 2017.

The US$1 million (S$1.4 million) award, dubbed the Nobel Prize for teaching, was started three years ago by Dubai-based education charity Varkey Foundation to raise the profile of teaching worldwide.

The top 50 candidates, from 37 countries, were whittled down from more than 20,000 applicants and were picked on criteria such as achievements inside and outside the classroom, innovative and effective teaching methods, and whether they provide a values-based education.

The 10 finalists will be announced in February, and the winner revealed on March 19 at the Global Education and Skills Forum in Dubai.

Mr Tan, who was the creative director for the opening and closing ceremonies of the Asean Para Games in 2015, started teaching piano at 15 to pay for his own lessons.

He said: "If I'm working with young students, instead of teaching them notes, I teach them patterns. They arrange objects to (learn to) put a musical passage together."

The adjunct lecturer at Republic Polytechnic, Nanyang Academy of Fine Arts, ACS International and Lasalle College of the Arts has also taught music at many other schools - including A-level, O-level and International Baccalaureate music - and at welfare and special homes.

"When I teach (troubled youth), I use percussion instruments and then they get the chance to fight (with music), to shout as loud as they like."

Mr Tan, who is married to a music teacher and has three children, said: "Teaching music is my calling... I strongly feel I can use this as a vehicle to guide other people, simplifying complex concepts into a simple language."

If he wins, he plans to use the prize money to fund a "creative playground" for musical learning, which would come with a surround-sound recording studio. He also wants to set aside $120,000 for scholarships for students.

Said Varkey Foundation CEO Vikas Pota, 42: "Philip, in particular, has worked hard to raise the profile of music education, including its role in helping autistic pupils."