Motorcyclist skids and falls on his own, then inexplicably confronts nearby Merc driver 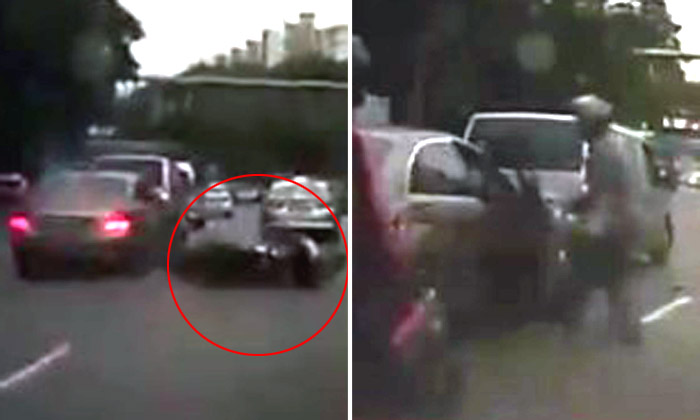 A viral video showing a motorcyclist confronting a Mercedes driver after skidding and crashing to the road, seemingly on his own, has become a talking point among Singapore motorists.

The clip was shared on All Singapore Stuff recently, and shows vehicles travelling on a road in Singapore on a rainy day.

A Mercedes can be seen coming to a halt behind a row of vehicles that have stopped due to heavy traffic.

A motorcyclist, travelling between two lanes, skids and falls after braking suddenly near the Mercedes.

However, the rider gets up and opens the door of the Mercedes to confront the driver.

He then lies on the road, visibly hurt from the accident.

Many motorists, including the Mercedes driver, stop to help the motorcyclist.

However, many netizens have also pointed out that the Mercedes did not appear to knock into the motorcycle, which appears to be a distance away from the car when it skids and falls.

They also noted that the Mercedes driver did not appear to signal or or attempt a lane change, and said that the biker may have skidded due to the wet road condition.