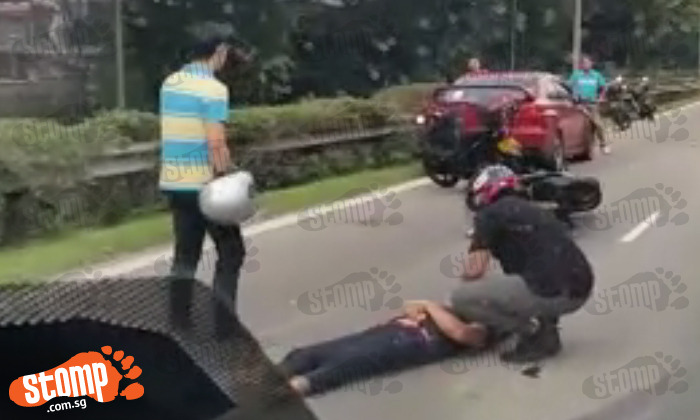 Stomper Bugatti alerted the Stomp Team to an accident that happened at Pan-Island Expressway (PIE) Exit 36 From Tuas towards Changi Airport near Bahar Flyover this morning at 7.20am.

"There was a heavy traffic jam.

"Apparently, an accident happened, involving a motorcyclist and a car driver.

In the video provided by Bugatti below, passers-by are spotted gathering at the side of the road, trying to contact the authorities.

A man (possibly the motorcyclist) is seen lying barefeet on the ground, while two motorcyclists attend to him.

Just a few feet away, a motorcyle is spotted lying flat on the ground, indicating that the motorcyclist could have skidded off his bike.

"On Nov 24, at 7.12am, the police was alerted to an accident invoving two cars, three motorcycles and a taxi along PIE towards Tuas.

Related Stories
Biker sent flying after crash on PIE, then gets run over by another rider
Motorcyclist sent 'flying' off bike after ramming into car that suddenly changed lanes on SLE
accident
PIE
car accident
motorbike
motorised bicycle