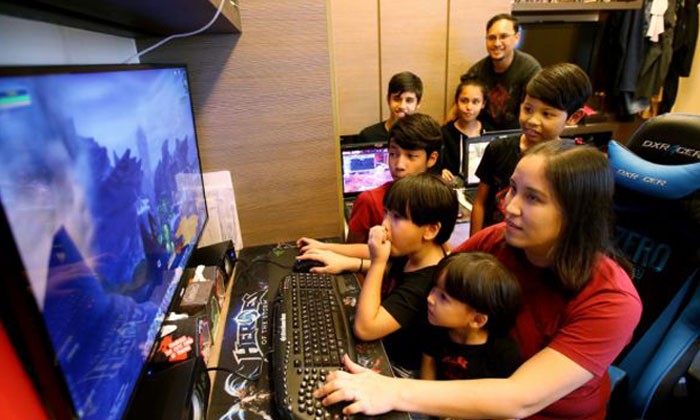 A family that plays together stays together - that is how housewife Tanja Lay, 37, feels when she plays the online role-playing game World Of Warcraft (WOW) with her husband and six children, aged four to 18.

"It's an enjoyment for your child to come to you and want to do something with you, rather than for them to go out all day," she told The New Paper.

It also changed Mrs Lay's life. She credits the game with helping her "recover" from a medical setback.

In 2012, she suffered from a ruptured brain aneurysm and it affected an artery on the left side of the brain, which is used for language.

She had trouble forming sentences and reading after undergoing surgery to clip the aneurysm.

She recalled: "I could only read and talk like a seven- or eight-year-old. My mind would go completely blank. I would get panic attacks."

This led to depression and a fear of meeting new people, for which she has been seeing a psychiatrist every one to two months for the past four years.

Her husband, Mr Austin Lay, an IT manager, 39, suggested she play WOW to regain confidence in communicating by typing through the game's chat system.

He introduced WOW to her in 2007, after playing it himself a year earlier.

And one to two months after the surgery, that was what Mrs Lay did. She was initially hooked on WOW for its gameplay and diverse creatures.

She made so much progress before her first visit to a speech therapist that follow-ups were not needed.

She said she regained her reading and speech abilities after playing for five months.

Mrs Lay still has trouble with remembering music and playing the piano, both of which she excelled at before the aneurysm.

However, she is still thankful for her recovery, adding: "I feel very grateful to (Warcraft developer) Blizzard Entertainment for this game.

"That's why I tend to (trust) their products."

Mrs Lay typically plays WOW for up to three hours a day and prioritises her errands as a housewife. Mr Lay mainly plays on weekends due to his work commitments.

Mrs Lay also feels blessed that she gets to share her passion with her five sons and only daughter.

As their children grew and started playing computer games with their friends, their parents introduced WOW to them.

With the exception of the two youngest boys, the family teams up for multi-player events such as quests and raids when they are free.

Each session is usually held in the master bedroom of their condominium unit. The parents use desktop computers and the children use their own laptops.

Sessions typically last for one to two hours, but the family has played for up to five hours on certain raids.

Mrs Lay said: "To see everyone so enthusiastically doing something as a family... as a mother, it's a very loving feeling."

She feels that the teamwork required on WOW has strengthened their ties and her children are able to organise themselves when assigned household chores.

Trisha, a student at ITE College West, agreed that the game has made her closer to her brothers.

She said: "It feels cool to be playing with them and having a great bond with them."

Despite being the eldest, she prefers not to assume leadership roles in the game, nor is there a clear hierarchy among the siblings in real life.

Jason, the oldest son and a student at Bukit Batok Secondary School, added: "I feel very lucky because not many parents play games with their children... My friends say that I am lucky."

Despite the family's love for WOW, Mrs Lay is determined not to let their gaming activities become excessive.

She locks the children's accounts during the school semester and they do not have any issues with discipline.

Jason, who is studying for his N-level exams this year, said: "I'm okay with my parents locking my account. If they didn't, I might lose focus on my studies."

Senior consultant neurosurgeonErnest Wang told TNP that in games like WOW, "it was probably the whole process of receiving visual aid and information, processing it and communicating back" that helped Mrs Tanja Layrecover.

When the ability to communicate is affected by the rupture of a brain aneurysm, which is the bulging of a blood vessel, a patient needs to practise reading, writing and speaking to recover.

"In her case, it is very possible and likely that (WOW) helped her," he said.

However, Dr Wang "wouldn't know" if online games are more effective than forms of therapy, such as reading out loud and speaking to others.

He said: "It's a useful form of rehabilitation, but I wouldn't say it's better than visiting a speech therapist. Ultimately, you still need a therapist overseeing the (recovery) process."