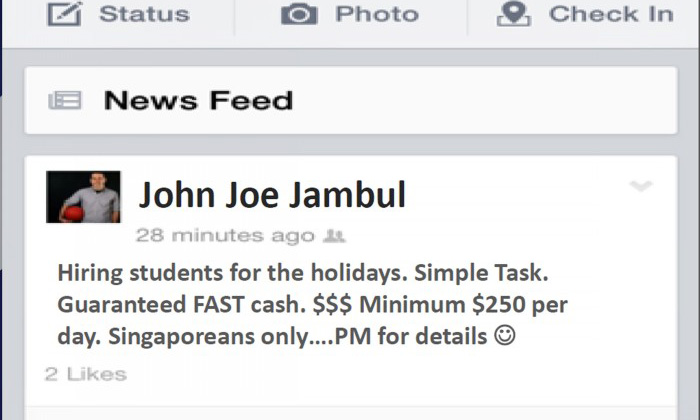 The advertisements online and on social media promise fast cash for part-time work.

Invariably, young people who apply for these jobs find out that they must carry out loansharking activities, including harassment of debtors. Many of them, attracted by the easy money on offer, still sign up.

Invariably, most get arrested for breaking the law and could end up doing hard time in prison.

Even first-time offenders can face up to five years in jail, a fine and caning.

This new trend can be seen by the huge increase in the number of arrests for unlicensed moneylending harassment in just a year. From January to April last year, there were just 10 arrests. For the same period this year, the number jumped to 61.

Assistant Superintendent (ASP) Mohamad Farhan Anas told The New Paper yesterday that a lot of young people were recruited mainly through social media sites such as Facebook and online classified sites such as Gumtree.

The advertisements are usually vague, where the nature of the job scope is never specified, added ASP Farhan, who heads the police's unlicensed moneylending strike force.

Young people, including students, are attracted by the amount of money offered - up to $200 per job or a day's work. "When these youth contact the advertisers, the unlicensed moneylender would then give them details. The main lure is the fast cash," said ASP Farhan.

The switch from traditional methods of recruitment such as flyers or word of mouth, to more sophisticated platforms such as social media, with its wider reach, could be one reason for the rise in youth joining the illegal trade.

ASP Farhan said: "This is the year where we really saw a jump. In some cases, the youth were recruited through social media."

None of the 61 youth arrested this year were debtors who became loanshark runners to pay off their debts. Instead, they were unsuspecting youth targeted through recruitment advertisement, said ASP Farhan.

Depending on the severity of the methods used to harass the debtors, loanshark runners can sometimes be paid up to $400 to $500 per job.

They are usually given specific instructions by their bosses, especially if it is their first time.

They could be instructed to go to a hardware shop to buy kerosene and lighter fluid to set fire to the door of a targeted flat.

They even take videos of the fire, which are later used to harass the debtor living there.

ASP Farhan said one of the worst cases his team had seen was a fire at a Woodlands flat in March.

A 46-year-old woman, who was trapped in the flat during the fire, was taken to Singapore General Hospital for smoke inhalation.

A 19-year-old was later arrested for allegedly setting fire to the flat.

To prevent more youth getting involved in unlicensed moneylending harassment, the Community Policing Units from the 35 Neighbourhood Police Centres use a set of PowerPoint slides to help raise awareness among youths during their patrols.

More long-term plans include school talks, usually done by the CPUs, after the June school holidays.

They will spread awareness through social media as well.

An 18-year-old currently at the New Charis Mission halfway house, told TNP that he got involved in loansharking activities because of his friends.

The teen, who cannot be named, said: "I knew I was doing something wrong, but I chose to continue because I needed the money.

While he was never charged for his offences, he regrets what he had done.

ASP Farhan said it can be disheartening to see youths being arrested for unlicensed moneylending harassment.

"For me, it's disappointing because the nature of the offence is very serious. And they had done it by choice.

"It's disheartening because they have to be charged in court and end up with a criminal record despite their young age."

Agreeing, Congruence Counselling Services counsellor John Vasavan, 56, said that youths who are attracted to easy money might not realise the consequences of their actions and they can get caught.

"Once you have a criminal record, you'll find it difficult to get a job. Even if you can, it might not be a good job," he added.

First-time offenders found guilty of assisting in the business of unlicensed moneylending can be fined between $30,000 and $300,000, be jailed up to four years and caned up to six strokes.

First-time offenders found guilty of acting on behalf of an unlicensed moneylender, committing or attempting to commit any acts of harassment can be jailed up to five years, fined between $5,000 and $50,000, and caned between three and six strokes

Former teen loanshark runner: 'Watching them spray homes with paint made me want to join in'

Former convict Ezekiel Seah, 31, knows only too well how getting involved in criminal activities such as loansharking can lead to pain and regret.

He started as a loanshark runner at 16 after dropping out of school in 2001.

"I wanted to fool around. I was not interested in my studies," he said.

Becoming a loanshark runner gave him a sense of belonging, he added.

"I had a very messy upbringing. My older brother was involved in drugs and gang activities and my parents were divorced," said Mr Seah.

"I wanted people to recognise me, and seeing my brother do those things felt cool. I wanted to have a group of friends as well."

He spoke of how he would accompany his friends to the homes of debtors and act as a lookout for them as they vandalised the homes.

He said: "It was exciting, and watching them spray the homes with paint made me want to join in."

For the next four years, Mr Seah splashed paint on doors or scribbled on walls to demand payment from debtors.

But he drew the line at setting fire to homes, which he felt went against his moral code.

He said: "I was never involved in setting fire to homes. Even when I was told to padlock someone's door, I wouldn't do it.

"I was afraid they couldn't run out of the flat if something happened, like a fire."

Mr Seah later got involved in drugs - consuming as well as selling - and his life began to spiral out of control.

In his darkest days, a money dispute over drugs led to his older brother's death. In February 2008, Mr Seah and his brother Seah Boon Lye were attacked by eight people at Geylang Lorong 10.

His brother was slashed to death while Mr Seah escaped with bruises.

"I didn't know what to do. I felt very remorseful because my brother had a wife and three children," he said, adding that he wanted to change his life after his brother's death, but "didn't know how to".

"Nobody wants to be a bad person, but I just didn't know how to change," he said.

The turning point came after Mr Seah was sent to jail for more than three years for consuming "Ice".

While behind bars, he resolved to put his life of crime behind him.

Since October, he has been with The New Charis Mission halfway house, where he is a mentor to an 18-year-old who was involved in drugs and loanshark activities. "It helps because my own experiences help them see what we have been through. It also encourages them not to go down that path," said Mr Seah.

Though his programme will end next month, he plans to stay on as a counsellor to help other former offenders at the halfway house.

"I'll be going for a basic counselling course after this, but my long-term plan is to counsel youth at risk."

Urging youngsters to stay away from illegal activities, he said: "Don't be rebellious, love yourself and your family, because it's a tough journey to get back on the right path once you stray."