Pokemon Go players becoming a nuisance: They hog parking lots, litter, shout at night and peek into houses of residents 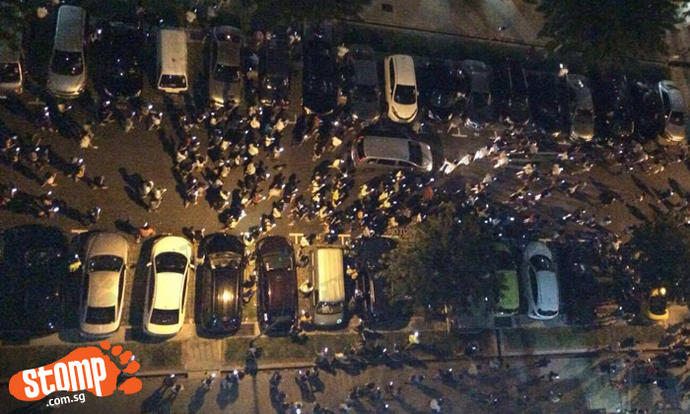 The Pokemon Go craze in Hougang has prompted police to step up patrols there "to monitor the situation for any law and order concerns".

The police have also put up advisories at the Pokemon hot spot in Hougang Avenue 10, urging players to practise road safety, not to trespass on private property and not to litter, they told The Straits Times.

Since the game's launch in Singapore on Aug 6, crowds have gathered daily at the Hougang hot spot, mainly at the amphitheatre and playground between Blocks 401 and 415, a strategic place for catching the game's virtual monsters.

This has left residents fuming as some players hog parking spaces for residents or park illegally, blocking the roads.

Some of the residents have complained of having their sleep disrupted by the shouting and screaming that continue into the wee hours of the night.

"In the evening, it's very crowded, until midnight, and it's very noisy," said service engineer Lim Pit Wee, 35, who lives on the fourth floor of Block 401.

"It's very hard for us to find parking spaces. We sometimes have to park a few blocks away from here."

Residents also voiced concerns about some players lingering at the common corridors and stairwells of nearby blocks to catch Pokemon.

Jeff, a manager who lives on the fifth floor of Block 415 and who declined to give his last name, said: "I like to leave my main door open for the cool air to blow in at night, but sometimes they peek into my home, so it feels like they're invading my privacy."

When ST visited on Tuesday and Wednesday nights, players were seen leaning against the common corridor railings.

Residents said litter has also become a problem, especially at the amphitheatre and playground.

When contacted, a spokesman for the Aljunied-Hougang Town Council, run by the Workers' Party, said it has arranged for cleaners to sweep and clear the bins in the area more frequently.

It also acknowledged "civic- minded and helpful Pokefans who took it upon themselves to clear up after the crowd".

Residents interviewed agree that it is the inconsiderate behaviour of a few that has given Pokemon Go players there a bad name.

Jeff, himself a Pokemon Go player, urged fellow players to be responsible.

"I understand their excitement and it's fine if they want to play there, but please be responsible... Clear up your rubbish."

Insurance broker James Tan, 28, who visits the Hougang hot spot to play the game, said he tries his best to be considerate.

"I don't stay there past midnight and I try not to be noisy."

According to Shin Min Daily News, some people have approached shop owners at the nearby blocks to rent the space in front of their shops to sell drinks, and even mobile phone chargers, to Pokemon Go players.

Related Stories
More Pokemon Go madness at Hougang and Toa Payoh: Trainers dash across road and make a lot of noise at 1am
Seriously guys, the game is not worth your life! 'Crazy' crowd near Block 401 in Hougang rushes across road to catch Pokemon
Sea of Pokemon hunters storm across road Hougang Ave 10 to Punggol Park, blocking oncoming cars and buses
More About:
pokemon
Pokemon GO
police