Missed Mars, Venus, Mercury and the waxing crescent moon last Saturday? Then you need to see these stunning pics 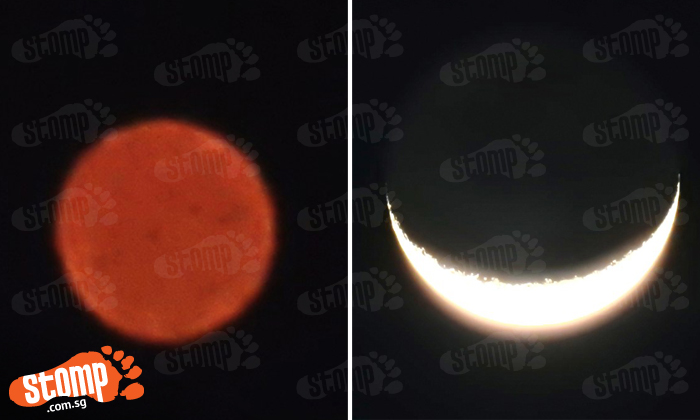 Mars, Venus, Mercury and the waxing crescent moon made an appearance together in Singapore skies last Saturday night (Dec 3).

If you missed the beautiful sighting, fret not.

Stomper Kannan shares these gorgeous photos that he and his friends took from various locations in Singapore.

"On 3 December 2016. right after sunset. the waxing crescent appeared in pair with the brightest celestial object in the sky, Planet Venus.

"And with clear night skies today, the two bright objects were believed to be seen from all parts of Singapore.

"Mars was also spotted above Venus and Mercury near the horizon in the west where it faint away after 8pm. Mars was clearly seen though throughout as a small reddish dot.

"Beside some pictures taken by me from Woodlands, some of my friends share with me theirs taken from other parts of Singapore."

Related Stories
Check out the beautiful yet eerie 'Hungry Ghost' moon that Woodlands resident saw
Stomper spots beautiful sky formation at Ang Mo Kio -- and wonders how it was formed
Is that a 'UFO' or just a really pretty ring of light?
sky
moon
nature