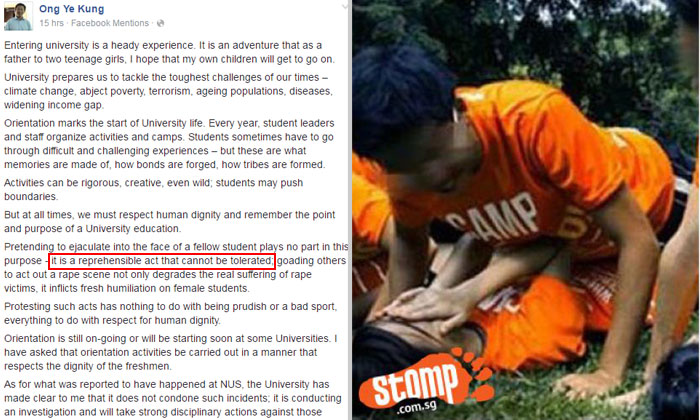 Acting Minister for Education (Higher Education and Skills) Ong Ye Kung has addressed the sexualised orientation games that have become a hot talking point among Singaporeans.

Stomp has been reporting on highly-sexual university orientation games for years.

The activities were put in the spotlight after The New Paper reported on the games that were carried out at the National University of Singapore (NUS)'s orientations camps in the past two months.

One student was asked whose bodily fluids she would like to drink, while another watched her peers re-enact an incestuous rape scene.

In a Facebook post, the minister said orientation activities may push boundaries but issued a reminder that human dignity must be respected at all times and to remember the point and purpose of a University education.

"Pretending to ejaculate into the face of a fellow student plays no part in this purpose - it is a reprehensible act that cannot be tolerated; goading others to act out a rape scene not only degrades the real suffering of rape victims, it inflicts fresh humiliation on female students."

He has asked that orientation activities at universities be carried out ion a manner that respects the dignity of the freshmen.

He also added that NUS has clarified that they do not condone such incidents and is conducting an investigation that will take strong disciplinary actions against those found responsible.

Netizens have lauded Minister Ong's strong and clear stance on the matter and demand that something must be done about the matter.

Read the comments in the gallery above.