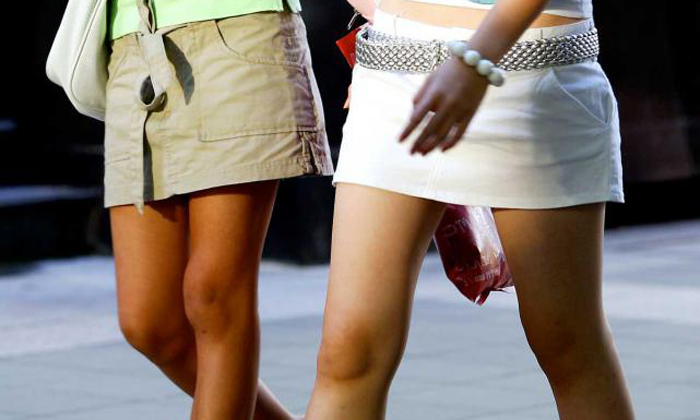 Mini skirts, hot pants and shorts - how a woman dresses - became a point of contention after a The Straits Times reader wrote a forum letter suggesting a dress code, for both men and women, in public places.

The forum writer Mr Benjamin Sim Buke Huang was responding to a case where a dentist was jailed for molesting an MRT passenger who had been wearing shorts ("Dentist jailed 6 weeks for molesting woman on MRT"; July 2).

In the letter titled "Mind how we dress in public" published on July 9, he wrote that the molestation case reminded him of the kampung days, when adolescent girls were told by their parents not to wear hot pants or shorts in public as such attire was "too revealing" and did not reflect well on the girls' modesty or upbringing.

Mr Sim urged parents to relook how adolescent girls - as well as adults - should dress when in public.

He brought up how women here wear shorts to many places, including to places of worship.

"This shows a lack of respect to others as well as for the religion," he wrote.

While most agreed that appropriate dressing should be observed at places of worship, Miss Wang Weiqin, who wrote a separate forum letter to The Straits Times on July 10, found Mr Sim's suggestion on having a dress code in public places "somewhat narrow-minded".

"I guess it should be dressing appropriately for the place or occassion. Being appropriate means dressing to respect the host, the (occasion), the venue and most importantly yourself."

Many who reacted to Mr Sim's letter felt like it was a case of victim-blaming.

Facebook user, Oliver Ming Kang, wrote: "Victim blaming at its best. It doesn't matter even if someone shows up in underwear (ie, swimming pool). Crime is a crime and the blame should never be shifted to the victim."

Another Facebook user Mingli Lin wrote: "If a man wore tight shorts and tank top, does it mean any random woman (or man) can touch his body?"

Mr Francis Cheng who disagrees that parents and society should dictate how girls and women should dress in public wrote in another letter published by The Straits Times on July 11:

"Who are we to judge what is the right or wrong dress code in public, and where do we draw the line?"

"It is one's personal right to choose how one dresses in public. One need not dress modestly to be respected.

"Modesty is a choice and not a requirement," he added.

Mr Cheng made a point that women should be able to dress as they wish to express their confidence through their attire, and not according to someone else's idea of what is proper.

He emphasised that what needs changing is how men are taught to regard and behave towards women.

"If a man cannot stop thinking that a woman is a sex object because of how she dresses, that is his failing, not hers," he wrote.

"If a woman makes a choice to wear a short skirt, it is her right to do so without harassment. Her attire should not give any man an excuse to exploit or molest her."

Weighing in on the debate on women's dressing in public, Facebook user Eileen Kee wrote:

"(A) molester with intention to do sick act will still continue to do so regardless of the dressing of the victim."

A Facebook user named Carla Castle suggested: "How about instead of focusing on the attire of the clothes we focus on educating people on not touching people in public?"

On the other spectrum, some netizens feel women have to dress responsibly.

Netizen Illyanna Vee wrote: "(M)en should certainly control themselves, but women too have the responsibility not to put temptation in their way."

"(G)irls, if your intention is not to gain attention with skimpy dressing then why do it?" wrote Bess Leow.