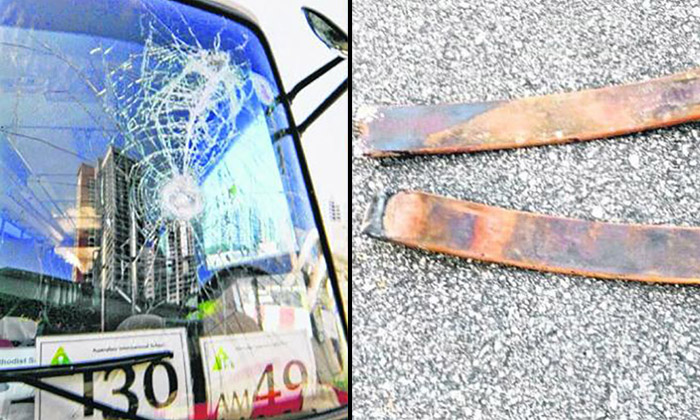 A man driving a school bus in Commonwealth got a shock when metal pieces landed on its windscreen, shattering it.

The incident occurred along Commonwealth Avenue West, towards Clementi Avenue 6, on Aug 10 at about 10.40am, Shin Min Daily News reported yesterday.

The bus driver, Xu Yujin, 63, told Shin Min that he was driving when he heard two loud noises followed by a cracking of his windscreen.

"A bus was trying to cut into my lane so I slowed down when suddenly the windscreen shattered and gave me a fright," he said.

Mr Xu added that the windscreen was double-glazed and the cracks spread out like a spider's web but did not break completely, although some pieces fell inside the bus.

"Usually, primary school kids take my bus but luckily there were no passengers at the time of the incident," he noted.

"When I alighted and saw two rusty metal plates, I felt it was serious and called the police."

He pointed out that the road he was on ran parallel to the East-West MRT line viaduct.

He suspected that the pieces had fallen from above.

"When the police arrived, they notified SMRT, and they sent a spokesman down, who said they would provide compensation if they had caused the accident," said Mr Xu.

"However, after investigations, they said that the metal pieces did not belong to them and so would not make any compensation."

An SMRT spokesman told Shin Min that the metal pieces were not found to be from its tracks or trains.

It is understood that the metal did not match SMRT's components.

Mr Xu spent $5,000 repairing his vehicle and getting a replacement driver.

He added that he has turned to an MP for help and requested for footage from the Land Transport Authority to determine where the metal pieces came from.

"However, it was fortunate that there were no kids on the bus or motorcyclists in front of me then, or it would have been disastrous," he added.