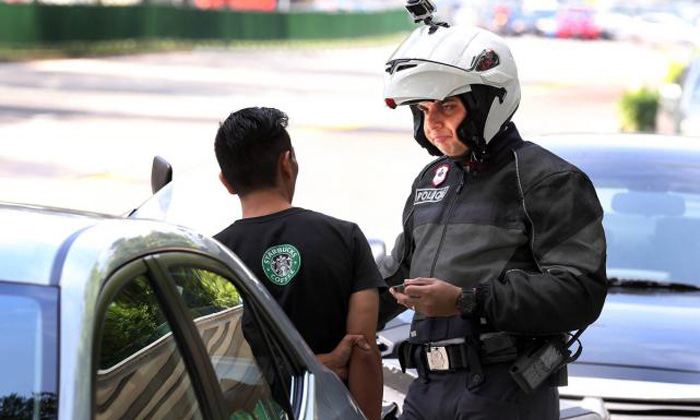 Dressed in black jackets and riding black motorcycles, these "bikers" give motorists a shock when they turn on their lights and sirens and reveal their true identities.

The covert officers have been on their bikes since last month in the latest attempt by the Traffic Police (TP) to clamp down on road offenders - particularly errant motorcyclists.

TP commander Sam Tee said it was not easy for officers to go after motorcyclists in unmarked cars, as they can lose sight of them in heavy traffic.

But the 900cc "stealth bikes" are much more manoeuvrable.

Bikers are an area of concern.

TP statistics show that last year, 4,875 motorcyclists and pillion riders were injured, a 5 per cent rise on 2014.

This group comprised almost half of all road deaths last year - 72 out of a total of 152.

To address the problem, the TP have increased enforcement to target what they call a "small minority" of motorists who misbehave.

In their first month of operations, TP's stealth motorcycles detected over 700 violations - including offences ranging from using a mobile phone while riding to reckless riding.

Covert operations - which also include offences detected by unmarked cars - booked 2,653 violations in the first six months of this year, up from 1,048 in the same period last year.

When The Straits Times accompanied the TP's Special Operations Team on their stealth bikes yesterday, virtually all those caught seem surprised when pulled over.

Senior Staff Sergeant Pardeep Dass, 31, said: "They always imagine TP officers are in white uniforms, but once they see us in full gear, they know we are police officers and comply."