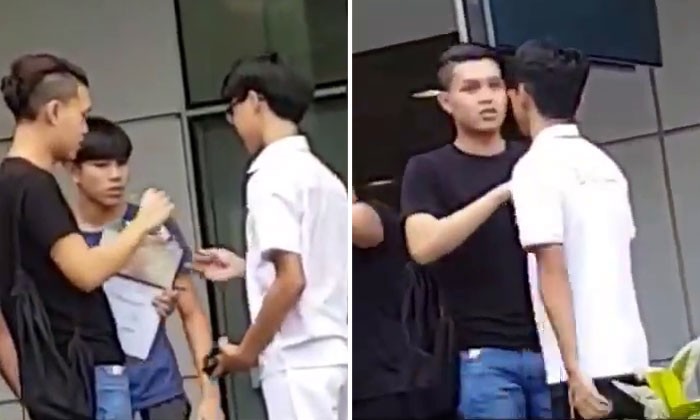 The police have said that they are looking into reports of people forcibly seeking donations in public after a video showing a group of young men apparently claiming to be police officers circulated online.

A Stomper alerted us to the video that was first published by a netizen on Monday (Apr 3). It has since been removed. A copy of it however can still be found on Unscrambled.sg.

In the video, a secondary school student in uniform can be seen handing money to a man clad in a black T-shirt who was accompanied by three other men.

A companion was with the student at the scene, but tried to leave as his friend was 'donating' money.

However, the man in the black T-shirt stopped him, apparently to ask for 'donations' as well.

Read a caption on the video when it was first published by the netizen:

"Please share this around to help your friends or child.

"In this video at Punggol Interchange, you can see one of the students wanting to walk away from these people, but one of them pulled him back.

"These people will say that they are policemen and will force you to 'donate' $10 if not you can’t leave.

"It happened to one of my friends recently, like this student.”

Said the Police on Facebook about after the video circulated on social media:

"The Police are looking into reports of people forcibly seeking donations in public. In some cases, these subjects had also claimed to be Police officers. The Singapore Police Force would like to clarify that we do not seek donations.

"Any person seeking donations must hold a valid licence issued by the Police or the National Council of Social Services.

"Members of the public can perform the following checks:

"(a) Request for the Collector’s Certificate of Authority (CCA) from the person who is soliciting for donations.

"Members of the public can call the Police at ‘999’ for immediate assistance if they have reason to suspect that a collection is illegal.

"A Police report can also be lodged via the Electronic Police Centre at www.police.gov.sg/epc/index.html or at any Neighbourhood Police Centre/Post.

"It is an offence to impersonate a Police officer. Under Section 170 of the Penal Code, Chapter 224, any person who impersonates a Public Servant shall be liable on conviction to imprisonment for a term which may extend to 2 years, or with fine, or with both.

"Under Sec 3(2) of the House to House and Street Collections Act, any person who solicits donations without a valid licence shall be liable on conviction to a fine not exceeding $5,000 or to imprisonment for a term not exceeding two years or to both."