Men brawl with cabby at Changi Village: Netizen alleges they were told to throw their beer bottles before boarding taxi 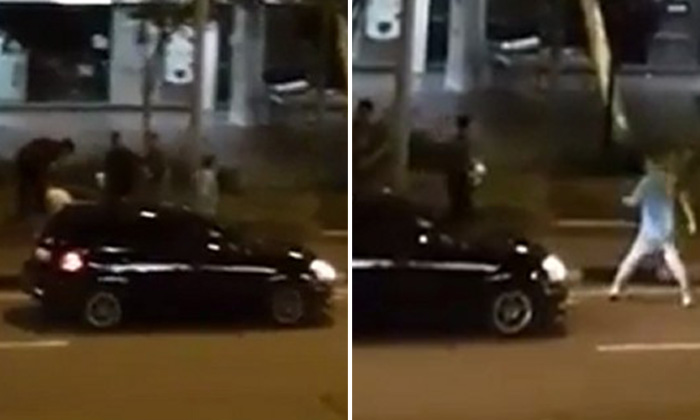 A viral video shows a group of men tussling with a taxi driver at midnight in a housing estate in Changi Village.

The video was posted on Chana Desu's YouTube channel on Jul;y 16.

The clip shows a group of men trying to seperate two guys who are fighting at a grass patch near the road.

Another driver can be seen stopping his car to alight and see what is going on there.

One of the men stumbles away from the group, and two men in can be seen crossing the road at this point.

Another man, clad in a white shirt, can be seen being supported by his friend to cross the road.

The man who earlier stumbled away is seen getting into the driver's side of a nearby taxi, but is stopped by some men from leaving.

He can be seen getting out of the car to take with the men, before he heads over to talk to some police officers who have arrived there.

The man in the white shirt and his friend make their way back across the road to talk to the officers.

According to the clips caption, the taxi driver was about to pick four passangers when they talked to each other for awhile.

The passengers then supposedly walked away to dispose their beer bottles and then entered the taxi.

After moving for not futher than a few meters three passengers allegedly alighted while one remained in the car.

The driver is said to have came out of the car and was dailing some numbers on his phone.

The caption states that this was when one of the guys, dressed in black, punched the driver in the eye.

Although he shouted for help no one approached the conflict, and they walked away in a fast pace while trying to hail another cab.

But there were no other cabs around and they allegedly continued ignoring what their friend had done.

The driver than yelled at them not to run and that the police have been called.

The three men are said to have approached the driver the at this point, while the guy in the white shirt continuously poked him in the chest in a very provoking manner while the othertwo got closer to him.

Athough the cabby is said to have backed away, they continued to got close to him.

One of they guys then got up and elbowed the driver in the neck while the other two surrounded him as shown in the video.

One of the guys wearing a black shirt ran away when the police arrived, although the taxi driver pointed in the direction of the man who was running away.