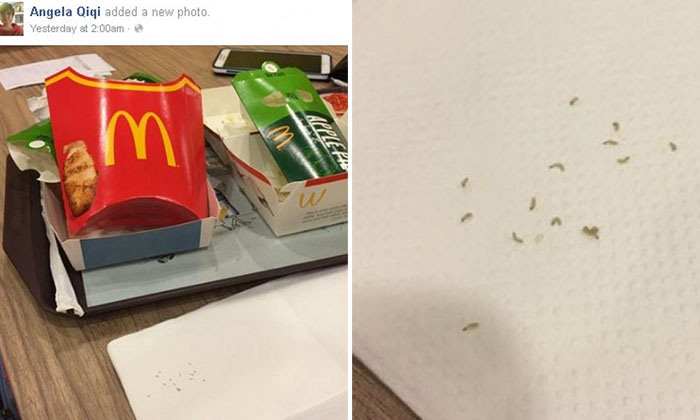 McDonald's has responded to a viral Facebook post claiming to have found worms in a Fillet-O-Fish box.

The Facebook user said she only noticed the worms after finishing the whole burger.

"What the hell is this ... I just finished the whole fish fillet burger then realised these worms inside the packaging... Which are still moving!!!!"

The post showed some meal receipts and finished food from at the fast food chain. A few tiny worms can be seen wriggling on a tissue paper.

"Omg, I feel so irritating and kept drinking hot water now hoping can kill the worms inside my stomach," the post added.

In response to queries by Stomp, McDonald's said that they are looking into the matter.

“First, let me emphasise that food quality and safety are our top priority. We take all customer feedback very seriously and have been in contact with the customer.

"We are looking into this very closely and are doing everything we can to establish the facts of the matter.”

This is not the first case of 'worms' found in a McDonald's product. In a previous case in Oct 2015, a customer found worms in his Big Breakfast.

The case gained much attention and was reported on Stomp, The Straits Times, DailyMail, Mirror, AsiaOne and more.

After investigations into the incident, McDonald's laboratory results showed that the worms were at least two to three days old.