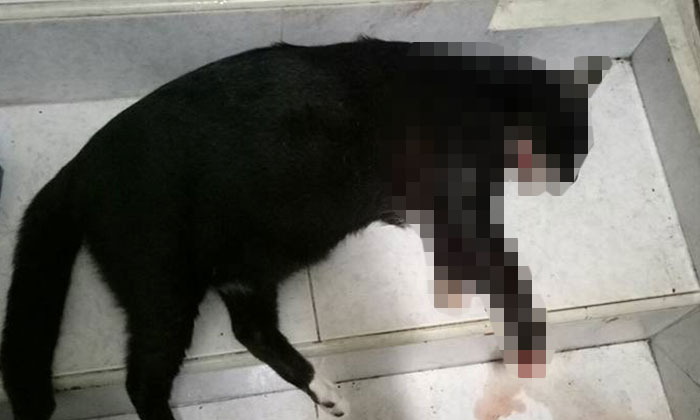 Facebook user Muhd Nur Hakim woke up to the sight of his beloved pet cat lying still in a pool of blood on the doorsteps to his HDB apartment, and foam coming out of its mouth at about 5am last Friday (Dec 09).

His mum had alerted him upon discovering the cat in front of their apartment.

In the photos uploaded, the cat could be seen lying still in a pool of blood, and the blood had even splattered onto the doorsteps, shoes and the shoe rack outside the apartment.

According to Hakim, the incident allegedly happened at Block 217 Marsiling, and the killer could have struck between 3am to 5am.

“My neighbour informed me that when he got back from work at around 3am, there wasn’t a pool of blood in front of my doorsteps.

“Next thing I know, my mum woke me up at about 5am, telling me my cat is hurt and there is a pool of blood in front of my house.

“Let’s help one another so that this cat killer can be caught and punished for animal cruelty.”

He has also filed a report to the Agri-Food and Veterinary Authority of Singapore (AVA), claiming that foam was coming out of its mouth when he discovered it and that it had been poisoned.

Related Stories
Chinese cat lover arrested after he was discovered killing and selling strays as "rabbit meat"
Cat found with rod stuck in its testicles at Jalan Minyak in Outram
Cat deaths in Yishun continue despite 2 arrests: Join Stomp on the prowl for the latest updates
cat killer
animal cruelty
Pet cat allegedly poisoned by cat killer in Marsiling dies in a pool of blood