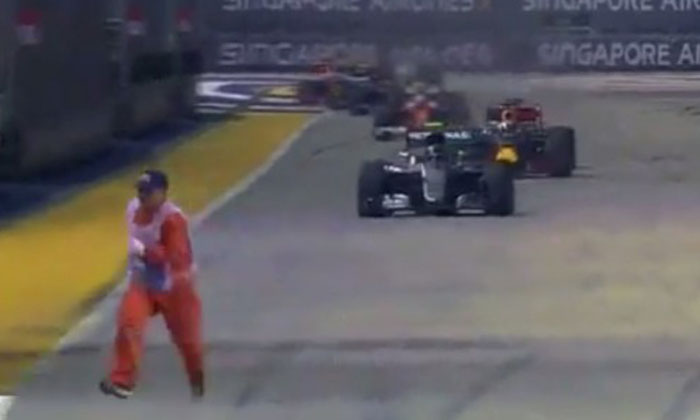 A Formula 1 marshal ran for his dear life as race cars came zooming at him while he was still on the track at the Singapore Grand Prix.

The video that was shared by McLaren Team on Sep 18 went viral after the man's terrifying near-miss.

In the clip, the orange-clad track marshal sprinted to the side of the track as the top three sped through in seconds.

One of the cars driven by Nico Rosberg even seemed to have come dangerously close to him as it swerved.

The race had apparently restarted while the marshal was still clearing the debris.

According to autosport.com, the FIA's procedure requires race control to call 'track clear' three times before restarting the race, having been given assurances by the clerk of the course that any debris or marshals were clear.

But it has emerged the marshal was instructed by a circuit official to head out onto the track after that final call was made and when the cars were approaching.

An FIA spokesman told Autosport the governing body followed its own protocols but its procedures were not "properly executed" by the clerk of the course and their team.

The spokesman added: "We take this very seriously.

"We're not trying to put the blame on single people.

"Everything will be done to ensure this does not happen again."

Rosberg, who won the race, said: "It was not a nice experience to see someone running across [the track] when I'm arriving at 300[km/h].

"So I just made I drove through safely, but it was a bit of a hairy moment because I don't think he saw us coming."

"I lost some time definitely."

Netizens are now calling him the 'most committed' track marshal, saying he gives a whole new meaning to 'putting your body on the line'.