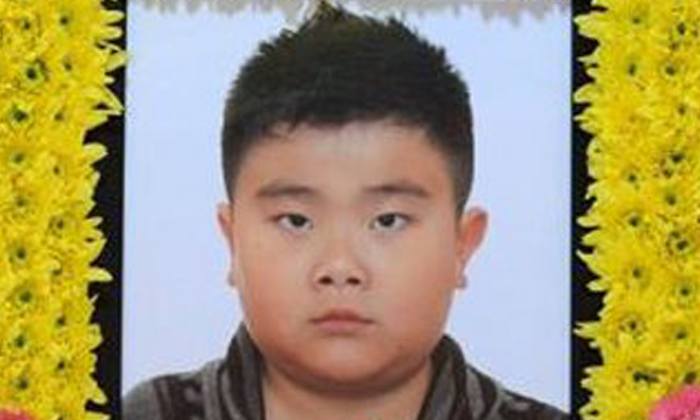 It was an emotional roller coaster of a day for the Hue family yesterday.

They were initially shocked that Zenneth, 11, was identified in a news report as the latest dengue fatality.

The shock turned to anger when they found out it was all a misunderstanding.

Last month, The New Paper had reported that the Primary 5 pupil from Maris Stella High School had died suddenly after he was found unconscious in the school bus on the morning of Aug 30.

Zenneth's godbrother Daniel Teh, 28, who spoke on behalf of the family last night, denied the "death by dengue" report categorically.

He said: "We confirmed with the authorities yesterday afternoon. He is definitely not a dengue victim. The facts were being distorted."

Zenneth's grandmother, who wanted to be known as Madam Swee, said in a separate interview: "The two doctors that my grandson saw did not bring up dengue at all. I don't remember him being bitten by a mosquito either."

It all started with a joint statement issued on Tuesday by the Ministry of Health and the National Environment Agency.

The statement said that an 11-year-old boy who lived at Woodleigh Close had died from dengue on Aug 30, the same day Zenneth was admitted to KK Women's and Children's Hospital (KKH).

Keeping with policy, the ministries did not identify the victim, who was the eighth person to die from dengue this year. The area was an active two-case dengue cluster that was closed on Sept 14.

MOH was informed of the cause of the boy's death in a pathologist's report on Tuesday.

Zenneth shared similarities with the dengue victim - he was also 11, and lived at Woodleigh Close too.

The day before he was found unconscious, he had barely recovered from a 41 deg C fever.

After he was found, Zenneth was taken to KKH, where he was pronounced dead two hours later.

The cause of his death remains a mystery that the Hue family decided not to dwell on, said Madam Swee, 64.

Two weeks ago, the Hues were told that Zenneth's autopsy report was ready for collection, and that there was an administrative fee of $158.

After some discussion, they decided not to buy it.

Said Madam Swee: "It's like spending money to buy ourselves grief... So what if we find out? Knowing how he died won't bring him back to life."

The news came at a time when the family was trying their best to let go and move on, she said.

Between sobs, before it was confirmed that he had not died from dengue, Madam Swee said: "Zenneth's death is like a wound that's trying to heal. Knowing that he could have died from dengue is like picking a scab."

Agreeing with Madam Swee, Mr Teh said the family has been trying to move on quietly in the past month.

They were overwhelmed by the attention after the media picked up on Zenneth's death.

"Just when the media attention had died down, this had to happen," Mr Teh said, referring to the dengue speculation.

The past month had been difficult, said Madam Swee, who also has a 10-year-old granddaughter.

A select number of photographs of the boy adorn the Hue family's apartment at Woodleigh.

The rest have been slotted into a photo album full of Zenneth's pictures, which Madam Swee said she secretly leafs through, from time to time.

She still misses her grandson, who would crawl into bed with her, or accompany her while she waited for taxis.

There were moments when he would also share his food with her, like his bowl of bird's nest.

Said Madam Swee: "He was such a considerate boy."

"Why did he have to die so young?"

Related Stories
Maris Stella boy who died in school bus told mum not to argue with grandma -- something he had never said before
11-year-old Maris Stella pupil mysteriously dies on school bus
'No warning signs' teen was suicidal on day he died
More About:
death
youths
heartbreaking
dead
student