Man who took upskirt photos in Toa Payoh before getting pinned: Alleged victim was trembling and crying 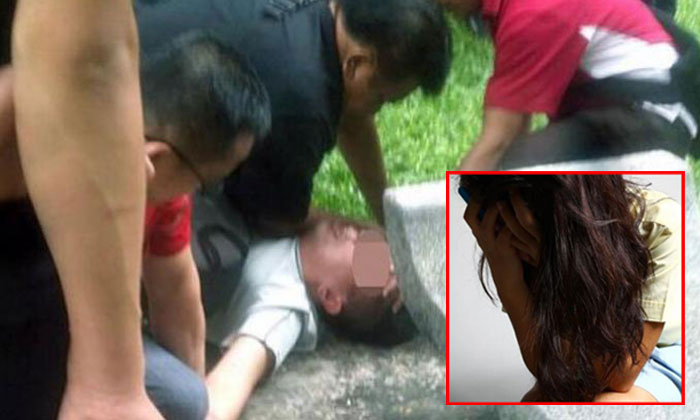 The man ran off towards the HDB blocks in the area after the woman shouted for help, but the men caught up with him after about 100m.

They pinned him down for about 10 minutes before the police arrived to arrest him.

The woman, who is in her 20s, was ascending an escalator at Exit C of Toa Payoh MRT station at 2.25pm on Wednesday when she realised a man was taking upskirt photos of her, Shin Min Daily News reported.

A bank employee who wanted to be known only as Mr Chua, 25, said the woman was shouting for help while pointing at the man.

Four men chased the suspect while the woman ran behind them.

A 19-year-old saleswoman, who wanted to be known only as Miss Lim, was waiting for her friends when she saw the four men chasing and catching the middle-aged man.

The man, whom she described as well-built, tried to break free after he was pinned down.

She told Shin Min: "A woman in a blue dress caught up with them and I overheard her saying that the man was trying to take upskirt photos of her."

Shin Min understands that the middle-aged man, who also claimed he has high blood pressure, said he would cooperate only if he received medical treatment for it.

The police said they were alerted to a case of public nuisance at Block 175, Lorong 2 Toa Payoh, and a 43-year-old man was arrested.

The alleged victim was visibly shocked, trembling and crying.

Nurse Lau Wing Yup, 32, said he saw a crowd at Block 175 and thought someone had fainted and needed help, so he got off his bus at a nearby stop. He then saw the woman sitting at a nearby bench, crying.

He told TNP: "Several people went up to try to comfort her, but she continued to tremble uncontrollably. She was very emotional."